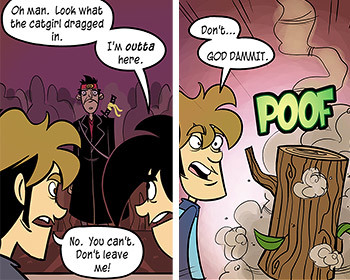 "On at least one occasion, he leveraged a clearly preternatural ability to escape detection by disappearing completely — leaving a log in his place. Does he decide what is left behind, or is the log is an inextricable result of the process? I will see if he can leave a cheese plate instead."
— Tycho, Penny Arcade, "The Return of Hattori Hanzo

A Ninja character is attacked and apparently fatally shot. But when the dust clears — surprise! Instead of a mangled body, the villains find some object. It may be a straw dummy, a heavy vase picked up from an adjacent room or even the ninja's empty clothes; in less serious settings the object will turn out to be a large wooden log.

The trope comes from ninja legends and has probably originated from ninja using various objects to check the area for ambushes, pretty similar to how some western characters use a helmet on a stick to trick enemy snipers. A less pleasant version of the trope involves disguising a captured mook to look roughly like the hero and pushing him into the room where ambush is expected.

In Japan, this is known as kawarimi note spelled 変わり身, a somewhat convoluted double pun off 変身, (Henshin), and 代わりに (kawarini, "instead"). "Transfauxmation Sequence" roughly approximates the nuance. Exactly where the log came from and how the ninja switched is a common source of jokes among anime fandom since no ninja is ever seen carrying one — perhaps they were hewn out of Epileptic Trees?

Compare: Actually a Doombot, Decoy Getaway, Outfit Decoy, Disguised Hostage Gambit, Escape Battle Technique, Flash Step, Sleeping Dummy, Smoke Out, and Switch-Out Move. Note that this is not a log kept by a ninja captain. Also not to be confused with a Ninja Post or Ninja Prop. For what's sometimes called ninja logging in online games, see Rage Quit.

Effectively a type of Swap Teleportation, since it's basically an instantaneous swap of the "log" and the ninja's body.