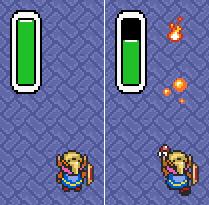 A minty metric measuring magical might.
"These ancient symbols of power contain raw magical energy, which increases my own capacity to summon energy for the spawning of spells."
Kain, about collecting Rune Pyramids in order to increase his Magic Meter, Blood Omen: Legacy of Kain
Advertisement:

The partner to the Life Meter, the Mana Meter describes the amount of power, often called Mana, a character has remaining for his special abilities. It is commonly associated with spell-casting characters in action RPGs and Real-Time Strategy titles.

In colour-coded games, this meter is most often blue, as a handy contrast to the Life Meter, which is most often red, yellow, or green (or green that turns red when low on health). Whether the Mana Meter recovers on its own, or needs to be replenished by items, is much more variable than it is for the Life Meter or the Sprint Meter.

This does not necessarily need to be magical in nature. It can represent an auxiliary power reserve, or other quantity that must be recovered between uses of a special ability. Sometimes it's a catchall, and Ki Manipulation, Psychic Powers, Functional Magic, or even Wave Motion Guns all drain the same "stuff".

A Mana Potion can restore all or part of it, or it can restore on its own with Regenerating Mana.

This is a subtrope of Mana.