I Call Him "Mister Happy" 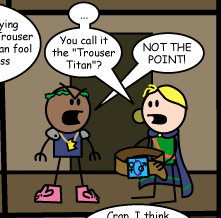 Steve: Heheh, I'm totally nekkid in here an' you're talkin' to me.
Marten: I'm only here to make sure you don't pass out and crack your skull in the tub. Now shut the damn door before I catch a glimpse of Little Stevie Wonder.
Steve: Naw man, that ain't his name. I call 'im Lil' Steve Ray Vaughn!
— Questionable Content, strip #477

Why should army men be the only ones to name their weapons?

Some guys get a kick out of naming their penis. The female equivalent (genitalia or breasts) is rarer, but not unheard of; a woman referring to her own breasts as "the girls" seems to be fairly common. The names themselves vary; sometimes it's their own name with 'Little' in front of it, sometimes it's something meaningful, like a reminder of a particular night, and sometimes it's just plain for fun. In real life, though sharing is rarely done with those capable of caring.

What these examples tend not to mention is why a man would voluntarily use the word 'little' in the description of his penis. It seems to be a form of anthropomorphism, in which the penis is thought of as a person (who, obviously, is littler than the real person who gave the penis its name...Or Is It)?

Arguably, the trope namer is Robin Williams who appears to have introduced the phrase "shaking hands with Mr. Happy" way back in 1979.

See Meet My Good Friends "Lefty" and "Righty" for those who name the non-intimate parts of their body. Also see Unusual Euphemism. I Call It "Vera" is when someone gives a personal name to the other kind of weapon.

Has nothing to do with the character literally named "Mr. Happy".