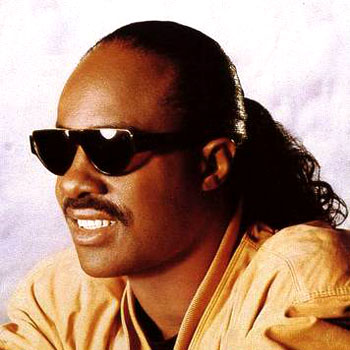 When you believe in things,
that you don't understand then you suffer.
Superstition ain't the way!
— "Superstition"
Advertisement:

Stevland Hardaway Morris (né Judkins; born May 13, 1950), known professionally as Stevie Wonder, is an American singer, songwriter, musician and record producer. He was born premature, and was blinded due to a medical mistake while recovering in intensive care. He first became famous as "Little" Stevie Wonder as a supporting act on the Motown Records roster. He could play keyboards and various percussion instruments, but it was his harmonica talents that most impressed Berry Gordy, and featured in Wonder's first hit, "Fingertips Part 2" (1963), a live recording of a mostly impromptu performance. (Listen closely, and you'll hear the bassist for Martha Reeves and the Vandellas stammering, "What key? What key?" after he got on stage thinking Stevie was done performing.)

Even at his young age, Wonder attempted to be progressive with his singing and song choices, notably his recording the Bob Dylan song "Blowin' in the Wind", which some at Motown thought was a mistake. While several of his 1960s hits, particularly "Uptight (Everything's Alright)" and his cover of "For Once In My Life", have proven durable, it's his material starting with 1972's Talking Book up through 1976's Songs in the Key of Life that is probably his most popular and well-regarded by critics. These songs even broke the alleged Album Rock "color barrier", thanks in no small part to his performing the Talking Book material on a tour with The Rolling Stones at that time.

Today, Wonder is still revered by many, though his days as a major radio force are over. He's also known for his political activism, from his criticisms in-song of Richard Nixon; to his song "Happy Birthday", which popularized the idea of Martin Luther King Jr. Day; up to his very vocal endorsement and support of Barack Obama. Wonder was inducted into the Rock & Roll Hall of Fame in 1989, and is also a member of the Songwriters Hall of Fame and the Rhythm and Blues Music Hall of Fame. In 1985, he won a Best Original Song Oscar for "I Just Called to Say I Love You" and received the Presidential Medal of Freedom in 2014.

Albums by Wonder with their own page: