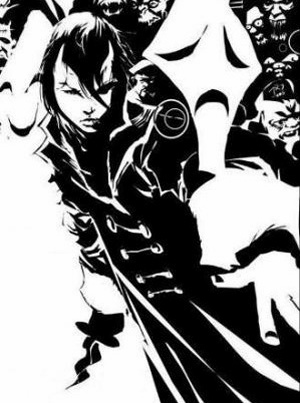 From left to right: Basilio, Trese, Crispin, the local hordes of hell
When the sun sets in the city of Manila, don't you dare make a wrong turn and end up in that dimly-lit side of the metro, where aswang run the most-wanted kidnapping rings, where kapre are the kingpins of crime, and engkantos slip through the cracks and steal your most precious possessions.
Advertisement:

Trese is a Filipino indie comic, written by Budjette Tan and illustrated by Kajo Baldisimo. Starting publication in 2005, it is about Alexandra Trese, a Private Detective who solves crimes related to the supernatural in the city of Manila.

An animated series was streamed worldwide by Netflix, produced by Shanty Harmayn and Tanya Yuson at BASE Entertainment, a studio based in Jakarta and Singapore, and directed by Jay Oliva, who directed several DC Universe Animated Original Movies and Young Justice episodes. It stars Liza Soberano (in Filipino) and Shay Mitchell (in English) and was released on June 10 2021. Trailer here