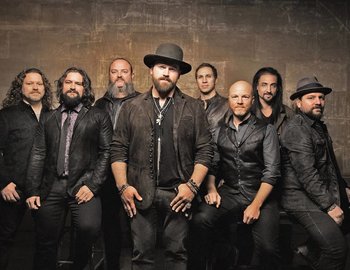 After a series of independent albums, the band broke through in 2008 with the song "Chicken Fried". Originally released through a now-defunct indie label, the song was picked up by Atlantic Records partway through its chart run and included on the album The Foundation. By this point, Fryar, Bowles, and Cook had joined (although Petruska and Williams were still credited on the album). "Chicken Fried" made them only the third country band ever to send its debut single to #1 on the Billboard country charts, and three of the other album's four singles topped the charts as well. Oh, and they won the 2010 Grammy Award for Best New Artist. Following two live albums, 2010's You Get What You Give notched four more chart-toppers, including a duet with Alan Jackson on "As She's Walking Away".

de Los Reyes joined just before their third album, Uncaged, which included the smashes "Goodbye in Her Eyes" and "Sweet Annie", along with the Jason Mraz-penned "Jump Right In". This was also their last album under the production of Keith Stegall, best known for his work with Jackson. Matt Mangano joined in 2014, taking over as bassist so that Hopkins could begin playing other instruments as well. During the transition, the band recorded a four-song EP produced by Dave Grohl.

Jekyll + Hyde followed in 2015, producing the country hits "Homegrown", "Loving You Easy", and "Beautiful Drug". This album included a vast array of collaborators such as Chris Cornell, Jewel, Sara Bareilles, and Cee Lo Green, and a cover of alt-country singer Jason Isbell's "Dress Blues". The Cornell collaboration, "Heavy Is the Head", introduced the band's hard-rock influences for the first time, and even topped the Mainstream Rock charts (making them only the second act after Bon Jovi to have both a #1 country and #1 mainstream rock hit). Alt-country producer Dave Cobb took the boards for the band's fifth major-label album Welcome Home, led off by the tender ballad "My Old Man". At the same time, Zac started an electronic side project called Sir Rosevelt, which released one album in the last quarter of 2017. Electronic influence carried over to the band's next album, 2019's The Owl, as well as Brown's solo album The Controversy that same year.

The band is known for its wide array of instrumentation and musical styles to the point of Genre Roulette, all usually anchored by Brown's nylon-string guitar, De Martini's fiddle, and the band's strong four-part harmonies.