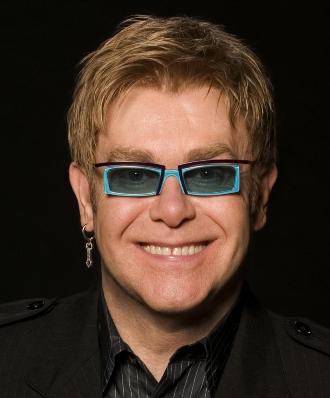 He remembers when rock was young.
Captain Fantastic, raised and regimented
Hardly a hero
Just someone his mother might know.
— "Captain Fantastic and the Brown Dirt Cowboy"
Advertisement:

Born Reginald Kenneth Dwight on 25 March 1947, in Pinner, England, classically-trained Sir Elton John began his career in various blues bands and as a session musician, before answering a newspaper ad by Liberty Records for aspiring songwriters. He was given his first set of lyrics by Bernie Taupin, a struggling lyricist, to set them to music. Taupin liked what he heard, and the two formed a platonic and professional bond — they have been a songwriting team (Taupin lyrics, John music) for most of John's career.

Changing his name by deed poll to "Elton Hercules John" in 1970 (Elton for saxophonist Elton Dean, John for a singer Reg's old band Bluesology backed up, Long John Baldry, and Hercules, well from a racehorse in Brit Com Steptoe and Son), Elton (with Bernie's lyrics in tow) would gain a reputation as a singer-songwriter-pianist par excellence. By 1972, he had begun to wear increasingly flamboyant costumes, clothes, and eyeglasses, which became a trademark for him until the mid-1980s. He became an unexpected superstar, with a string of highly successful albums such as Tumbleweed Connection, Madman Across the Water, Honky Chateau, Don't Shoot Me I'm Only the Piano Player, Goodbye Yellow Brick Road (a double), and Captain Fantastic and the Brown Dirt Cowboy. His success tapered by the late-1970s, especially after outing himself in 1976. In the meantime, he appeared in the film Born to Boogie as himself, and in Tommy singing "Pinball Wizard".

He has had numerous comebacks in The '80s and The '90s, and successfully rehabilitated himself from drugs, alcohol, and bulimia in 1991. He later helped score The Lion King (1994) with Tim Rice in 1994 (winning an Oscar), and co-authored several Broadway musicals, including The Lion King, Lestat, Aida, and Billy Elliot. He received a star on the Hollywood Hall of Fame in 1975, inducted into the Rock & Roll Hall of Fame in 1994, and was knighted in 1998. A theatrical revue of his songs, featuring Sir Elton in concert amid elaborate staging, films, and props, titled "The Red Piano'', opened in Las Vegas in 2004 and closed in 2009.

He has performed at Live Aid, Live 8, the Freddie Mercury Concert For Life and the Concert For Diana. He has also performed at the funeral for Princess Diana in 1997, singing a revised rendition of his 1973 hit "Candle in the Wind". "Candle in the Wind 1997", produced by Beatles producer Sir George Martin, became the most successful single of all time at 37 million copies, all royalties donated to the Diana, Princess of Wales Memorial Fund.

Elton is chairman of Watford Football Club, and founding chairman of the Elton John AIDS Foundation (EJAF), which he founded in 1992 after Ryan White's death.

He is well-known for his deft sense of humor, massive spending sprees, and very public tantrums. He is also well-known for wearing odd costumes and crazy glasses, especially in The '70s. His fortune is estimated at £175 Million, making him one of the most successful musicians of all time.

Good friends with fellow piano man Billy Joel, with whom he has toured sporadically since the 1990s.

His life and career are fictionalized in the biopic film Rocketman, which he helped produce and fully supported. Taron Egerton portrays him in it.

"Bennie and the Jets"

The song tells of "Bennie and the Jets", a fictional band of whom the song's narrator is a fan. In interviews, Taupin has said that the song's lyrics are a satire on the music industry of the 1970s.

"Bennie and the Jets"

The song tells of "Bennie and the Jets", a fictional band of whom the song's narrator is a fan. In interviews, Taupin has said that the song's lyrics are a satire on the music industry of the 1970s.