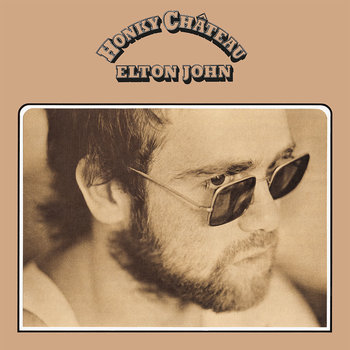 But, I quit those days and my redneck ways
And, oh, change is gonna do me good
Ooh I got a busted wing and a hornet sting
Like an out of tune guitar
Ooh she got Hercules on her side
And Diana in her eyes

Elton retreated to the Château d'Hérouville in France to record this album. The location would inspire the name of the title, which in turn would inspire a song, "Honky Cat".

Another song, "I Think I'm Going to Kill Myself", was a happy-sounding song—in a similar tonal vein as the de facto Title Track—with a heaping helping of Lyrical Dissonance.

But a different song, "Rocket Man", a soft ballad co-inspired by David Bowie's "Space Oddity" and a sci-fi novel by Ray Bradbury, would become one of Elton's most beloved songs.

In the United States, Honky Château would kick off a string of seven straight studio albums which would reach #1 on the Billboard 200 album chart. Oddly enough, it wouldn't go Platinum in the U.S. until 1995. The album was supported by two singles: "Rocket Man", and "Honky Cat". Both were Top 10 hits on the Billboard Hot 100, with "Rocket Man" going triple-Platinum in the United States. "Rocket Man" also hit #2 in the United Kingdom, his highest-charting single in his home country for five years, and went Platinum there as well.

Rocket man, burning out his tropes up here alone: