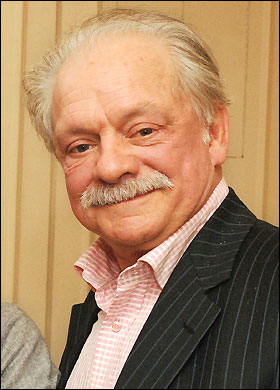 Sir David Jason, OBE.note He was made an officer of the Order of the British Empire in 1993 and knighted in 2005.
"When I worked with Ronnie Barker, who was very well known himself at the time, I always remember him saying, 'You don't have to be a shit to be a big star, David.' I've always tried to remember that."
Advertisement:

Sir David John White OBE (born 2 February 1940), known professionally as David Jason, is one of Britain's best known comedy actors (primarily). Started out in his 20s as a regular on the proto-Monty Python sketch show Do Not Adjust Your Set, as well as doing bit parts in Ronnie Barker's Porridge and The Two Ronnies (ironically, many of his early roles involved playing characters considerably older than himself) before securing the regular role of Granville on Open All Hours, also alongside Barker. Jason is perhaps best known for his role as Del Boy Trotter in Only Fools and Horses, although in recent years he's also become known for the more unusually straight-drama lead role of Inspector Jack Frost in A Touch of Frost.

A national treasure and immediately recognisable. Dead Ringers once did a sketch claiming that "on ITV, every night is David Jason Night" and that The BBC planned to retaliate by running nothing but repeats of Only Fools and Horses. Similarly, he was given top billing in the first two Sky One adaptations of Discworld novels, Hogfather and The Colour of Magic, despite the fact that his role in the first (at least) was quite minor. It also didn't help that the leading character was a 7-foot-tall skeleton with a scythe.

He also did the voices for many Cosgrove Hall cartoon characters, including the titular characters in Dangermouse (though not the 2015 reboot), Count Duckula, The BFG, Angelmouse, Father Christmas And The Missing Reindeer, Hugo in Victor & Hugo and Mr. Toad in The Wind in the Willows. His first wife was Welsh actress Myfanwy Talog

, who sung the theme tune for Dangermouse and voiced Princess Amaranth in Alias the Jester and Mrs. Clonkers in The BFG; sadly, she died in 1995.

Currently he's the VA of Skipper on Cosgrove Hall's latest series, the preschooler-oriented Pip Ahoy! and has returned to the role of Granville in sequel series Still Open All Hours. More recently he's branched out into documentaries, hosting series and one offs about British spies, transport, inventions and the Battle of Britain.