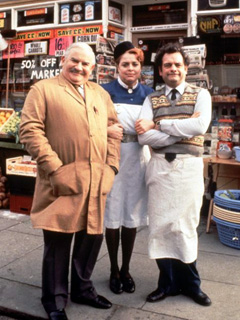 A late 1970s-mid 1980s sitcom by Roy Clarke (Last of the Summer Wine, Keeping Up Appearances). Along with Porridge, it was based on one of the more successful items from a series of sitcom try-out pilots by Ronnie Barker called Seven of One.

The miserly, late-middle-aged Arkwright (first name unknown; in one episode Granville calls him 'Albert' but the situation suggests he may have made it up) runs a general store in Balby, a suburb of Doncaster (both the shop and the street are real life places). An Honest John, he prides himself on never letting anyone leave his shop without buying something, and seems to take more pleasure in the thrill of the chase than becoming rich. His work obsession causes friction between him and his love interest/fianceé Nurse Gladys Emmanuel, a buxom midwife whom Arkwright attempts to convince to finally marry him (or at least to let him have his way with her.)

Arkwright is aided and abetted by his long-suffering nephew Granville, possibly the son of a displaced Hungarian noble and certainly the son of a woman whose promiscuity is the butt of many of Arkwright's jokes, whose romantic and exotic dreams are invariably crushed by the grim reality of life in 1970s South Yorkshire.

Ronnie Barker played Arkwright (a very common remark is that it's hard to believe he was simultaneously playing the very different character of Fletcher in Porridge) while Granville was one of the first major roles of a young David Jason (who also played the very old Blanco in Porridge!). Production was done on a very small budget, with the result that the vast majority of the show takes place on the same shop set - this arguably forced the programme to devote its full attention to the verbal comedy, which is often praised.

Barker also contributed Arkwright's famous stutter (absent in the original scripts). The character himself lampshades it at times:

After a successful one-off Revival episode in 2013 which scored the Christmas week's highest ratings, a full fifth series titled Still Open All Hours and featuring several of the original cast was commissioned, beginning on Boxing Day 2014. In this, Granville has taken over the shop following Arkwright's death.