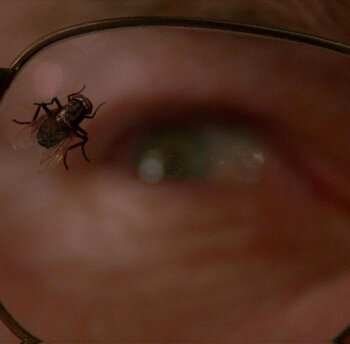 A household pest moves in, and most of the episode is spent trying to catch it. Hilarity Ensues.

The expanded version of Eek, a Mouse!!, filling its shoes as a staple of the Dom Com, and usually showing up at least once in any given Work Com. The pest in question is usually either a mouse or Terrifying Pet Store Rat, but substitute other animals as needed, particularly in sci-fi and fantasy settings. Expect the cast to be outsmarted and Hoist by Their Own Petard at every turn — Mouse Traps may be employed, but will frequently be sworn off as cruel. If and when the characters do finally catch the animal, don't be surprised if What Measure Is a Non-Cute? kicks in and they end up keeping it as a pet, or releasing it outdoors... where it will usually bolt right back into the house during the closing credits.

Basically, this is when the writers decided to try their hand at penning a Tom and Jerry episode. Most often used as a B-plot, in part because, much like in real life, not catching the pest is likely — meanwhile, the close quarters and Fire-Forged Friendships created by a common enemy can easily segue into other developments, in which case this can become a literal example of What Happened to the Mouse?

Tends not apply to insect infestations, where residents are more likely to become The Thing That Would Not Leave at someone else's place while their own is being fumigated — compare Termite Trouble and Flea Episode instead.

See also Fly Crazy and You Dirty Rat! Often lead to Roadrunner Vs Coyote-style hijinks, particularly in settings with a Resourceful Rodent, with a Funny Animal cast and substantial Furry Confusion. Contrast Adoring the Pests.