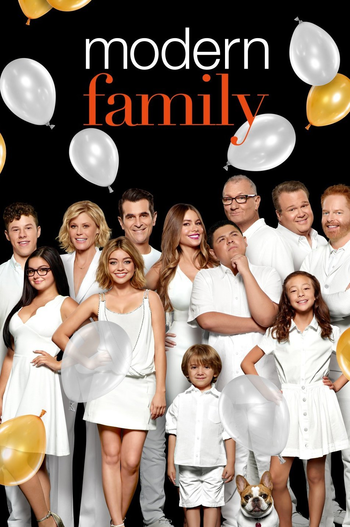 One big (straight, gay, multi-cultural, traditional) happy family.note L - R: Luke, Alex, Claire, Haley, Phil, Gloria, Joe, Manny, Jay, Cameron, Lily, and Mitchell.
"Family is family. Whether it's the one you start out with, the one you end up with, or the family that you gain along the way."
—Gloria Delgado-Pritchett
Advertisement:

Modern Family is an ABC sitcom that centers on three families:

At the end of the pilot, it's revealed that all three families are related—Claire and Mitchell are Jay's children from his first marriage. They frequently cross over into one another's stories.

Episodes tend to rely on standard family comedy tropes and plot lines, in a modern setting. The show uses the Mockumentary format popularized by The Office, but uses it to offer a poignant and honest portrayal of contemporary family life. It also tackles various aspects of modern-day living, including gay marriage, homophobia, adoption, race and prejudice.

open/close all folders
Tropes A-G
If you ever put your hands on my daughter again, I will string you up by your feet, run you up the flagpole and let the birds peck out your eyes.
Tropes H-M
Tropes N-S
older nerds who have crushes on her before she stops them from bullying Luke and Manny.
Tropes T-Z
Feedback