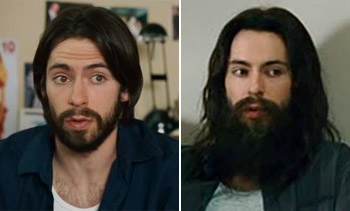 A long amount of time passes. A clean-shaven character is shown in the next scene with a beard. Or, if the facial hair is minimal, a full and/or longer beard (and sometimes additionally longer hair on their head) will be seen. Often used in animated media as Rule of Funny and sometimes involves the beard disappearing in the next scene, growing on children, or even being ripped off. Nearly Always Male, except in the very few occasions where it is used with women (usually limited to hair length or Girls With Mustaches parody). A form of Show, Don't Tell.

Not to Be Confused with Growing the Beard, though growing a beard can be such a harbinger.

Waiting Skeleton is a more extreme version of the same type of gag.