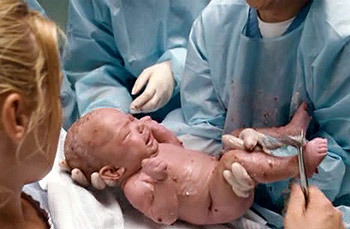 They grow up so fast these days.
"Many come from across the land to visit the newborn... three year old."
— The Nostalgia Critic, The Swan Princess review

A subtrope of Dawson Casting, one specifically about newborns, or at least TV so-called newborns. Whenever a supposedly just-born child appears on TV, the baby you will see will actually be several months old. Put this down to a mixture of simple ethics, employment laws, casting laws, and logistics that make it unacceptable to cast a real newborn in such a role. This is because sound stages are hot, bright, stuffy, and dusty places—not a great environment for a newborn infant prone to infection and unable to control body temperature.

This can have an unfortunate side effect, due to the fact that Reality Is Unrealistic, making a person's first encounter with a real newborn possibly squicky. Real newborns aren't clean-looking gurgling bundles of cuteness. Real newborns are covered in mucus, blood, amniotic fluid, and other bodily substances, up to and including fecal matter. There is a chance they could be covered in a peach fuzz-like substance called lanugo (a remnant of when our ancestors were a lot hairier than we are now; most fetuses lose it before birth, but obviously, a few don't). They may also be covered in a waxy substance called vernix caseosum, which is basically just congealed skin oils, dead cells, and lanugo. Their skin will usually have a red hue to it as well and look somewhat "wrinkly", especially if they are considerably premature. On top of all this, most newborns have noticeably misshapen heads from the birth process, since their skulls aren't yet closed and their bones are very flexible.note Babies delivered by caesarean section either do not have this, or it is far less pronounced. To say nothing of the placenta that should be popping out with the babe. Even newborns that have been cleaned up and are a couple days old are generally Ugly Cute at best. It's been said that all newborn babies look like Winston Churchill.

This can even carry over to newborn animal babies, which fiction likes to depict as the cutest, smallest things ever to arrive, when in actuality, most altricial newborn animals arrive slimy, hairless, and often eyeless because their eyes may be covered by a layer of skin that takes some time to wither away. Take a look at a newborn rabbit

◊ and you'll think your bunny just gave birth to a dumpling. Marsupials (such as kangaroos, opossums, possums, quolls, and koalas) are even more altricial, looking uncannily like gummi bears and being about the same size. Even baby precocial animals (those that are active and capable of complex actions shortly after being born), like baby chicks, ducklings, guinea pigs, foals, fawns, and calves, spend their first hour after being born exhausted from exertion and usually very drowsy, damp, and clumsy.

In fiction, birth is a much cleaner, nicer (but still painful for the mother) process, and in American films and TV shows, usually happens in a tent. The four-month-old tot pops out of his/her mommy as clean as whistle, gets bundled up, and is handed to Mommy (or possibly Daddy), looking around serenely. Don't expect this in real life, where a healthy newborn should actually be screaming and wailing loudly (as this indicates that they are breathing normally).note  Although C-section and waterbirth babies do usually tend to start screaming a bit later, instead of right away like babies born the "normal" way, because they tend to take a little more time to process that their environment has changed.

This is an Omnipresent Trope, so only aversions, subversions, inversions, parodies, particularly absurd examples, and the like should be added.