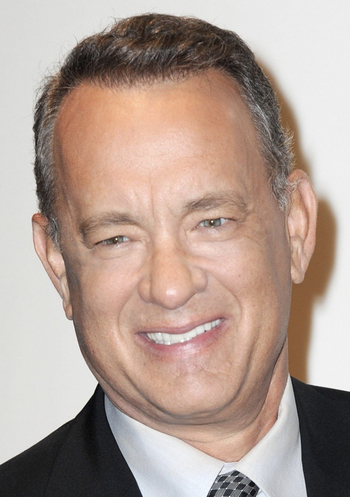 "I'm that actor in some of the movies you liked and some you didn't. Sometimes I'm in pretty good shape, other times I'm not. Hey, you gotta live, you know?"
— Tom Hanks on his Twitter account

Thomas Jeffrey "Tom" Hanks (born July 9, 1956 in Concord, California) is an American actor and director who is regarded as being one of the best performers of his generation.

He began his career in comedies like Happy Days and Bosom Buddies where he displayed a flair for timing and physical comedy. Quickly moving onto film, he became well-known for lighthearted comedies like Splash and Big as well as romantic films. In the latter genre, he's famously one half of Those Two Actors with Meg Ryan, having starred as her love interest in three filmsnote Joe Versus the Volcano, Sleepless in Seattle, and You've Got Mail.

Going into the nineties, Hanks' career took a sharp swerve as he began turning in critically-acclaimed dramatic performances, earning him back-to-back Oscars for his portrayal of the dying Andrew Beckett in Philadelphia and the simple-but-well-meaning Forrest Gump. Since then, his career has been eclectic, with his starring in films that run the gamut from comedy (The Ladykillers (2004)), children's films (Toy Story), heavy drama (Road to Perdition), science fiction (Cloud Atlas), and even his own blockbuster action franchise (The Da Vinci Code and its sequels).

He is a well-known space nerd and World War II history buff and these interests are reflected in his career, with his having starred in Apollo 13, Saving Private Ryan, and Greyhound. As well as having produced From the Earth to the Moon, Band of Brothers, and The Pacific.

He's hosted Saturday Night Live nine times (his fifth time hosting, in 1990, was the episode in which the "Five Timers' Club" was revealed) and Wait Wait... Don't Tell Me! once to rave reviews each time. He runs his own studio called Playtone, named after the music label in his self-produced That Thing You Do!. He's also a big enough fan of both The Beatles and Monty Python that he got to sing "The Lumberjack Song" (as one of the Lumberjacks) in the Concert for George, the memorial concert celebrating the life of George Harrison. He also appeared in the video for Carly Rae Jepsen's song "I Really Like You" - contrary to many rumours it was actually his idea to take the role.

And to top it all off, he is the Trope Namer for Tom Hanks Syndrome, being the most famous and successful example of an actor being able to break away from Typecasting and showing the world He Really Can Act.

His son Colin Hanks is also an actor, producer, and director.