Film / A Beautiful Day in the Neighborhood 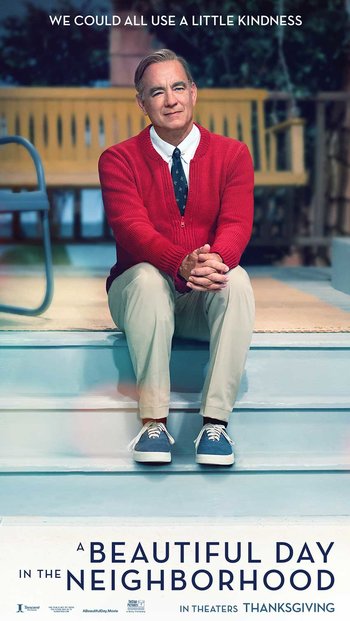 A Beautiful Day in the Neighborhood is a 2019 biopic directed by Marielle Heller (Can You Ever Forgive Me?) and written by Micah Fitzerman-Blue & Noah Harpster, based on the Esquire article "Can You Say... Hero?" by Tom Junod.

Lloyd Vogel (Matthew Rhys) is an award-winning writer for Esquire who is nonplussed and annoyed when his editor assigns him to write a profile on Fred Rogers (Tom Hanks), pastor and star of the hit children's series Mister Rogers' Neighborhood. Lloyd decides to treat the profile as an investigation to find out if Mr. Rogers is just a character for the camera, but the answer surprises him and changes his life. Chris Cooper and Susan Kelechi Watson also star as Lloyd's estranged father and wife.

Not to be confused with Won't You Be My Neighbor?, the 2018 documentary about the life of Fred Rogers.

A Beautiful Day in the Neighborhood contains examples of:

"I think the best thing we can do is to let people know that each one of them is precious."