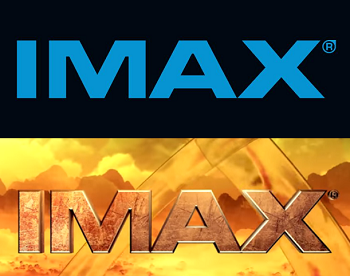 The IMAX logo and the Kong: Skull Island logo variant underneath.
Advertisement:

Some studios have vanity plates that are recognized everywhere. The moment you see a ring of stars swirling into place above a serene-looking mountain, for example, you know you're watching a Paramount movie. That little kid who tosses a fishing line into the water while sitting in the crook of the moon is instantly recognizable as DreamWorks. Such logos, once they climb to a certain point of universal recognition on the movie screens, are a sure fire form of brand name recognition.

Every once in a while, though, a creator will have fun with it. The Vanity Plate will be changed in some way, just enough to put a new spin on it; usually being tied into the style and tone of the movie it's featured in. Match Cuts are also a common form of this; less common are logos appearing within a show's universe either as Easter eggs or Shout-Outs. If the logo appears within the work as well as the opening sequences, see Company Cameo.

More examples are located at Logopedia

and the Closing Logos Group

open/close all folders
Bazmark Films
Baz Luhrmann’s film company Bazmark Films uses a logo based on the Australian coat of arms. It features the name "Iona" from Baz Luhrmann's record label company House of Iona, and the slogan "A life lived in fear is a life half lived" from Lurhmann's previous film Strictly Ballroom.
Blumhouse Productions
The Blumhouse Productions logo is of the interior of a haunted house, featuring ghostly activity (poltergeist activity, a ghost girl).
Advertisement:
British Broadcasting Corporation
Gaumont Films
IMAX
Each IMAX presentation has a pre-movie logo countdown sequence. Sometimes it has different themed versions.
Jerry Bruckheimer Films
The Jerry Bruckheimer production company had lightning striking a tree as its logo. The original logo was two lightning bolts striking in the same place from different parts of the screen — being the logo for Don Simpson and Jerry Bruckheimer's company. After Don Simpson's death, Bruckheimer altered the logo to the single bolt of lightning it presently is.
MTM Productions/Enterprises
Mary Tyler Moore's film company, MTM, uses a logo that is a parody of the MGM logo, using a meowing kitten (acquired from an animal shelter and nicknamed "Mimsie") instead of a roaring lion. MTM has used variations of its own logo for various shows produced by them over the years.
Mutant Enemy Productions
Note that the variants are all exclusive to Buffy the Vampire Slayer, and so the entries refer to episodes of that show.
NBC
NBC plays around with their "in living color" peacock logo on a few occasions. Some of them can be seen here

.
Nelvana
The Canadian studio Nelvana has a polar bear staring at the North Star as its logo.
Nippon TV
There are three types of logos for Nippon TV. Firstly, there was the Nippon Television Network Corporation, consisting of a glowing circle rising in the first kanji, turning the space background into a blue cloudy sky. Then, the second made one alteration to this, with the logo flipping to the golden Nippon TV logo on a white background. The third and final one was re-branded to Nippon TV Movies, set in a blue and red tunnel that turns the background white. The logo alterations usually employs a Match Cut or has its audio changed.
Screen Gems
Summit Entertainment
Toei Company
United Artists
Logos Named after Existing Media
A few logos are formed based on existing films/TV shows.
Pinball
Network logo bugs
Feedback