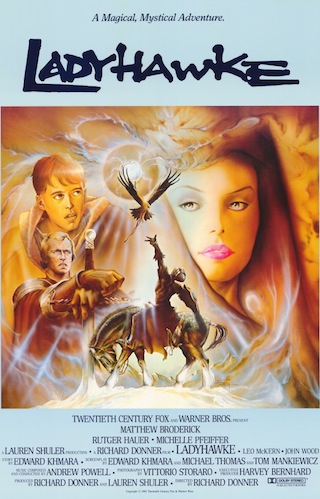 A 1985 fantasy/adventure film directed by Richard Donner, with a cast featuring both a number of veteran actors (such as John Wood, Rutger Hauer, and Leo McKern) and young actors who would go on to become household names (Matthew Broderick and Michelle Pfeiffer).

In the medieval French town of Aquila, a young thief named Philippe the Mouse (Broderick) escapes prison by sneaking through the sewers. Said prison and the lands around it are controlled by a corrupt Bishop (Wood), and he is none too pleased to hear of Philippe's escape (the prison is supposed to be inescapable, after all). The Bishop's guardsmen pursue and corner Philippe, but Etienne of Navarre (Hauer) unexpectedly comes to his rescue, aided by his fierce and beautiful hawk.

Navarre has a score to settle with the Bishop. Not only was he the former Captain of the guard, he and the Bishop once loved the same woman, Isabeau d'Anjou (Pfeiffer). When she chose Navarre, the jealous Bishop called down a curse on them: by day Navarre is human and Isabeau is a hawk; by night Isabeau is herself but Navarre is a wolf. Navarre plans to use Philippe's knowledge of the sewers to infiltrate Aquila and slay the Bishop, but his obsession might lead to tragedy. For the disgraced monk Imperius knows a way to break the curse, but it will only be possible while the Bishop is alive...