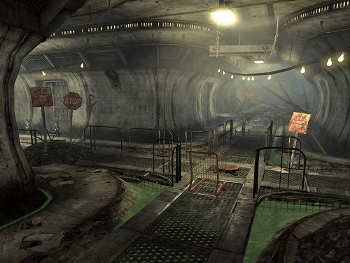 Iwata: Wow, I never knew sewer tunnels were so wide and spacious.
Watanabe: But what's strange is how nice it smells down here.
— Excel Saga
Advertisement:

When an urban sewer system is large enough to serve as an underground lair, be it a single dwelling or a colony serving an entire community. Realistically speaking, most modern sewer systems consist of pipes too small for an adult to enter. They typically range from a few inches in width coming from individual properties, to about 2-3 feet wide in the street. Even these largest ones can at best only be crawled through, and then only if they are currently empty. The story seldom cares enough to explain whether the sewer is a storm drain that carries rain and snowmelt to the closest body of water, or a sanitary sewer where, well, shit happens.

Older sanitary sewers may consist of underground canals with narrow walkways on the side. These canal systems are the basis of this trope, but very few creatures, humans especially, would actually be able to survive in sewers for any extended length of time. It's pitch black (sewer workers bring their own lighting), there's little oxygen and a plethora of noxious gases from sewage, making the air highly unsuitable for breathing without specialized equipment, and the effluence in some sewer systems is so toxic that even a drop on exposed skin can require a full decontamination shower.

Sewers featured in video games and any other form of fiction, however, are usually absurdly spacious underground rivers with ample room to move, enabling characters to avoid stepping into the actual sewage (often a good thing, since in many games, contact with sewer water is inherently harmful). These underground passages have more in common with the catacombs of Paris than any actual sewer system. The dim lighting, labyrinthine passages, and resident rats and alligators provide the perfectly suitable setting for heroes to chase criminals and/or monsters through. Occasionally, the place is so big people elect it as their home. It's not unusual to find whole shanty towns built in ludicrously large sewer or ex-sewer canals, coming close to transforming into an Underground City. And somehow there's always adequate lighting, warmth, and breathable air. Presumably, there's no bodily waste down there because Nobody Poops.

Such sewers also tend to be connected to a multitude of locations throughout the city, accessed through manholes with easily removable lids (in real life, manhole covers are heavy and lack obvious handles to prevent this exact thing), granting access directly into otherwise secure buildings; a perfect way for suspicious types to travel without detection, noxious fumes notwithstanding.

In fantasy or historical fiction, this trope becomes anachronistic. While the Romans did have a sophisticated sewage system for the city of Rome and other major cities across the Empire note the "Cloaca Maxima" or "great sewer"

, the system was too technologically complex for either contemporary civilizations or successor civilizations to replicate. From the Fall of Rome until the Industrial Revolution, the preferred method of waste removal was pouring it into ditches in the street where the rain would wash it away (sooner or later). However, this could be justified by fantasy societies, such as dwarves, that are more industrialized than their medieval human counterparts.

The story may sidestep the issue of living in human filth by having the "sewer" be an abandoned subway, maintenance tunnel, or fallout shelter, especially if it's still accessible from the sewers, thus invoking this trope (and making it seem to outsiders that they still live in a sewer) while giving the characters someplace a little more sanitary to rest their heads.

Real life spacious sewers do exist, either because they need to be spacious enough for people to access, and therefore maintain them, or to acomodate massive volumes of water. See IAMA Drainer

. In practice, the "underground tunnel network where homeless people and thieves live" of urban lore does exist in a few industrialized cities. They are usually a system of technical tunnels built to accommodate water from various sources, electrical cables, storage spaces for the underground rail systems, and so on. The reason for its spacious construction is that it has to allow maintenance workers and sometimes their vehicles to run inside.

Established beneath Nevarro, The Covert serves as the home to The Children of The Watch.

Established beneath Nevarro, The Covert serves as the home to The Children of The Watch.