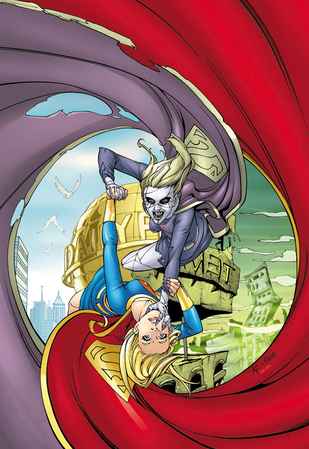 Story by Sterling Gates. Art by Jamal Igle.
Bizarrogirl: Does self-punishment end, Supergirl?
Supergirl: It might never end, Bizarrogirl. We can be sorry for what we've done, be sorry for hurting others, but it's what we do afterwards that really matters. But if it does end, it will be because you look into a mirror... and realize you've already punished yourself enough.
Advertisement:

Bizarrogirl is a Supergirl 2010 Story Arc written by Sterling Gates with art by Jamal Igle.

In the aftermath of the destruction of New Krypton, the Last Children of Krypton are struggling through severe psychological damage and Survivor Guilt. While Superman tries to cope with his pain by walking across the United States, Supergirl is staying over with Lana Lang after going missing during six weeks, wanting nothing but to become "Linda Lang" permanently, quit being Supergirl and forget Kara Zor-El ever existed.

However her retirement plans are ruined when Bizarrogirl crash-lands on Metropolis. What does her Bizarro counterpart want? Can she be stopped by a depressed and demoralized Supergirl? And more importantly, what is she running from? What has happened to Bizarro World?

Bizarrogirl is considered by many fans one of the best Supergirl stories ever written.

In Live-Action Supergirl episode "Bizarro", Bizarrogirl's characterization is loosely based on Gates' version, incorporating traits such like her and Supergirl being reflections of each other.

Bizarrogirl: We saved Bizarro World, Supergirl... So why do me now hurt inside?