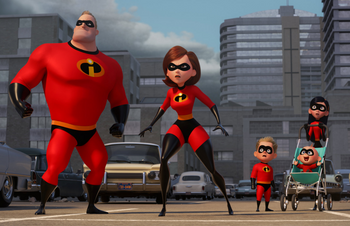 "Besides, everyone knows that red robots are always the good guys."
— Transformers: Armada
Advertisement:

Red shows up a lot when it comes to the heroes of a story, usually the color of their clothing. As their main color motif, it could also be their hair color, gear, Battle Aura, or body parts for robots and non-human characters. This could be limited to the main protagonist or be as wide as an entire Badass Army. Some Chromatic Arrangement trios have the leader wear red.

In Japan, this was traditional in old Kabuki plays and the like. It's made to represent the hero bathed in the blood of his enemies. It is much less common in America due to the association with red as the color of the country's enemies (redcoat British in the Revolutionary War, Red Scares and the Cold War in the 20th century), but gets a pass if it's paired with white and/or blue.

A Super-Trope to Primary-Color Champion and Pink Heroine. A Sub-Trope of Good Colors, Evil Colors. A Sister Trope to Fire Is Red, Blue Is Heroic and Good Wears White.

Compare AND contrast Red Is Violent, which is sometimes used as its Evil Counterpart and sometimes its Good Is Not Soft counterpart. (In the latter case, expect overlap.)