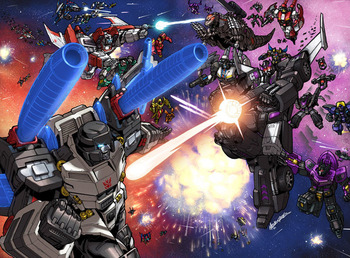 "The mirrorverse is roughly 50% blue cannons by volume."
Cliffjumper: So, you're telling me that Megatron's a good guy and Optimus Prime is loonier than Straxus? Last week, I'd have told ya that you had a cracked cylinder. But... I've seen some crazy things lately. Dimension hopping, time travel, alternate realities... what I wouldn't give for a simple war with good guys and bad guys!
Sideswipe: CJ, if you want a simple battle between good and evil, you have one right here! The players are just in different places than you expect.
Advertisement:

The Decepticons wage their battles to destroy the evil forces of... the Autobots?

In a strange Alternate Universe, a librarian named Optronix, obsessed with power, cheated his way up through the ranks, then formed a band of similarly ruthlessly ambitious individuals. After reformatting himself into Optimus Prime, he led his new faction of Autobots into a successful conquest of Cybertron. Fortunately, a young mathematician by the name of Megatron, who had been forewarned by his equations that civil war was likely to happen, was able to form his own band of rebels, and led the Decepticons in a war to restore freedom to Cybertron.

After millions of years of fighting, the Transformers now stand poised to spread their battle to Earth, though they might find themselves entangled in the humans' own civil wars, as well as the machinations of the oppressively fascist United States. The Autobots, however, are more than ready to try and turn all of this to their advantage. Fortunately, the Decepticons have a newly-arrived dimensional traveler to help them, a strange Autobot by the name of Cliffjumper — who brings news of other universes where the Autobots are good, the Decepticons are evil, and the planet is a god — as well as a trio of friendly science interns and their boss.

Unbeknownst to both sides, a third old faction of secret acolytes are plotting their own takeover of both Cybertron and Earth, involving ancient beings on the run and potential multiversal consequences...

Just about every sci-fi universe that lasts long enough gets its own Mirror Universe, and, as you might have guessed from the description, Transformers finally got theirs in April 2008. It started off as an April Fools' Day joke gone horribly wrong (or right, depending on your POV), when the official Fanclub showed what they claimed to be a three-page preview of the upcoming BotCon comic, featuring a mirror universe story full of over-the-top bizarre character reversals and cheesy homages. The fans ate it up, thinking it was the best thing ever. The subsequent revelation that it wasn't actually the real comic didn't go over quite as well.

The real comic ended up being a more straightforward, serious, and clichéd take on the subject, though it still garnered a fair bit of positive fan attention. The later prose stories took a page from the reaction to the April Fools joke, and ended up being much more light-hearted and goofy, as well as engaging in more creative opposites than just "good/evil", as did the Around Cybertron side comic. The follow-up fanclub magazine serial comic, however, tended to follow the original comic in tone.

While the main SG continuity so far focuses on a mostly-Generation-1 mirror, there are a few less-developed official SG versions of other continuities, with Transformers: Animated being

In 2021, it was announced that IDW publishing would publish a 5-issue miniseries reboot titled Shards.

Has a character sheet with the character-specific tropes.

This series/universe provides examples of: