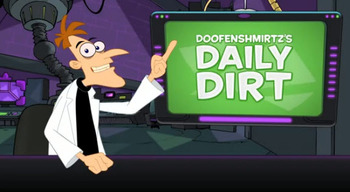 Contrary to what the title says, this was actually never daily.note It was actually weekly. He named it the Daily Dirt for an Alliterative Name.
"In his shocking 200th episode, Strong Bad turns the entire series on its ear. Will we ever see a 201? Is the reign of HREmails at hand? For the answers to these questions, be sure and NOT check out my blog. I haven't updated that thing in years!"
— Strong Sad, Strong Bad Email, "email thunder"
Advertisement:

With the rise of the internet, a new method of breaking the fourth wall has been developed; a blog kept under the alias of one of the fictional heroes (or, occasionally, villains) in a comic, show, or book. The writing will be done "in character," and readers may be allowed to correspond with the character as if they were a real person.

They are becoming increasingly popular, with many major series having some sort of Character Blog in operation. Quite a few webcomics like to employ these as well.

Usually, the Character Blog is seen as positive, a quirky addition that exists between Canon and Fanon; it adds to the story, but isn't mandatory reading.

Webcomic Time can be a headache to such blogs, since the comic may take several weeks to tell a day's worth of story, while the blog is kept in real time.

It's not without its pitfalls, however. It's much more difficult to hide things such as Writer on Board or Creator Breakdown when writing a blog, and the assumed identity may slip from time to time. Conversely, a writer assuming the identity of a character with strong Jerkass tendencies has a fine line to walk between portraying the character accurately and using the fictional personality as an excuse to sneer at any fan who ventures a question via the blog. A lack of professionalism in the blog's writing may result in an extreme example of the Internet Jerk in action.

It may also be confusing to young readers, or to people who stumble across the blog without being familiar with the show. It's unlikely, but the possibility exists that the character is mistaken for a real person, particularly if the source material is obscure.

Since a full-on blog can take a lot of work to update regularly, characters often instead create microblogs on Facebook or Twitter.

Apart from official blogs, it is a popular pastime among roleplayers to maintain fan-made blog accounts for specific fictional characters (and sometimes for convoluted permutations, e.g. alternate universe versions, de-aged versions, genderbent versions, etc.) Participation in Journal Roleplay games typically consists of maintaining a blog and interacting with other characters. Favorite outlets include Tumblr, Twitter, LiveJournal and its clones, and the question-and-answer site Formspring.me (now offline).

May be part of a larger Alternate Reality Game. Compare Vlog Series. A complete work in this form is a variety of Log Fic.

Of course, the creators of many current works have their own accounts, which may (or may not) be more reliable than unofficial Character Blogs; anyone more interested in Word of God than Fan Wank should look for and verify these first.