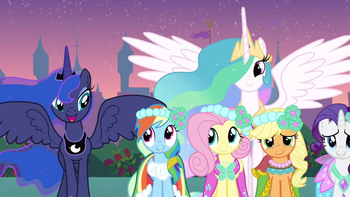 The one on the left.
Character creator: If we play our cards right, we could have a whole fandom on their knees producing a mountain of content for a character that has less than five lines of dialogue!
Intern: Maybe even less?
Character creator: Oh! I like you!
— ColeyDoesThings, "how popular characters are made"

When a relatively minor or undeveloped character gains a fanbase all out of proportion to their role in the work.

In horse racing, a "dark horse" is one with little or no racing history, i.e. an unknown quantity. Because gamblers would be "in the dark" about its chances to win, they would be less likely to place a bet on it. The phrase entered mainstream culture largely though politics, where a "Dark Horse Victory" describes a situation where a lesser-known candidate does much better than expected in an election.

By extension, an Ensemble Dark Horse is a member of the cast (anything from a non-lead secondary character to a single-appearance Flat Character), who becomes unexpectedly popular with the fandom. Contributing factors include who and where the work's fanbase is, as well as what the other characters are like in comparison. For example, a quirky one-shot can shine when the protagonist is The Everyman, while The Team Normal is more relatable when everyone else can fly and shoot lasers from their hands. At times, relative character flatness actually helps win the base: fans can more easily project themselves into the work through that person if they have no strong characterization to get in the way.

The writers or producers may be tempted to Retool the work's premise to make the Ensemble Dark Horse more prominent. Sometimes this works, but it usually doesn't: moving a supporting character into The Protagonist's position is hard to do well. If the writers "adjust" the character to fit into a conventionally heroic role, this often removes the unconventional traits that gained the character a following in the first place. However, if they don't do this, the traits that were appealing in a secondary character become grating and unpleasant when showcased by the protagonist.

However, it's still good business for a work to feature its popular characters, even if they weren't intended to stick around. Thus these characters are prone to becoming a Recurring Extra or getting A Day in the Limelight (depending on the kind of character). If the dark horse is an antagonist, the writers may decide to have them perform a Heel–Face Turn in situations where the only other option is being killed by the protagonists. However, if the series doesn't have an end planned, it's more likely that they'll just escape.

If the dark horse becomes an important character, they're now a Breakout Character. If they're so minor that they only show up for one or two scenes through the entire work, then they're also a One-Scene Wonder. See also Adaptational Badass, Ascended Extra, Memetic Bystander, Lower-Deck Episode, A Day in the Limelight, and Unpopular Popular Character. The Scrappy is the polar opposite, an unexpectedly hated character, as is Creator's Pet, a character who the writer grows fond of, but the fans do not. An antagonist who becomes popular despite the author's intentions is Draco in Leather Pants, which is an example of Misaimed Fandom. The natural extension of this is the Spotlight-Stealing Squad. Major characters who end up overshadowing their castmates often fall under Face of the Band, whether they're the true lead character or a supporting member who ends up overshadowing the lead, à la Darth Vader or Stewie Griffin.

Compare Cult Classic, for works which gain a fandom out of proportion to the work's quality, budget, or influence, and compare and contrast Base-Breaking Character, where one part of the fandom thinks a character is a dark horse but another thinks they're a Scrappy.

No Real Life Examples, Please! The real world isn’t a story with characters that could potentially make it better.