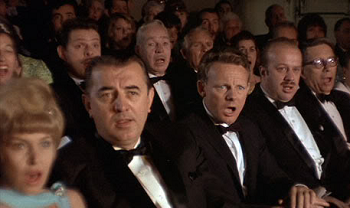 One of many reactions that can occur.
Advertisement:

Audience Reactions are opinions, not tropes. Some of them may be very prevalent opinions, or may have inspired an author to play or avert a trope or may even be what a work is most known for, or be on the contrary completely unknown or privy to a selected few. We put a name on them and categorize them because they're a point of interest to both fans and writers, but they should not be confused with tropes. They are highly subjective, argument-causing and aren't a building block of storytelling the way tropes are. For this reason we have restrictions for when and where they can be listed or potholed.

An Audience Reaction can't be played with (played straight, exaggerated, justified, subverted...)—because it never "gets played" intentionally to begin with—but for three exceptions:

If an audience reaction occurs or is discussed in-universe, it's acceptable to list the reaction in question on a work's main trope page. Otherwise, please place it on the YMMV subpage.