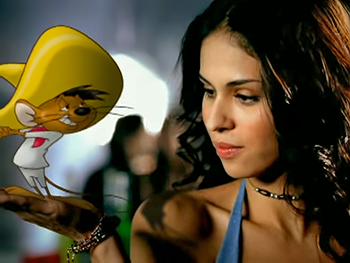 Maybe a little too much.
"In Mexico, we grew up watching Speedy Gonzales. He was like a superhero to us, or maybe more like a revolutionario like Simon Bolivar or Pancho Villa. He watched out for the little people but with a lot of bravado, and a weakness for the ladies. I'm really excited to be bringing this character to the big screen."
— Eugenio Derbez, on the planned Speedy Gonzales movie (currently in Development Hell as of 2022)
Advertisement:

When people of a particular culture, nationality, or any other demographic embrace a (sometimes unflattering) caricature of them concocted by another (often, but not always, an Ethnic Scrappy), this is the result.

Occasionally it can be a case of Insult Backfire, though it happens most often when the caricature in question is clueless rather than intentionally offensive. It's also often a case of Actually Pretty Funny when they recognize themselves in the caricature.

It may help if:

Compare Approval of God, when a fan adaptation or a parody of a work is well-received by the original author. Also compare Cross-Cultural Kerfluffle, Affectionate Parody, and This Loser Is You.

Note that this trope specifically involves, as the top of the page says, a stereotypical and sometimes unflattering caricature. If a group of people is portrayed positively and non-stereotypically in foreign media, and said group reacts positively to it, that's Watched It for the Representation or Germans Love David Hasselhoff. If said group dislikes their depiction to a greater extent than other audiences, it's Americans Hate Tingle. Do note that this trope and the characters described here can easily become base-breaking. One person's "Speedy Gonzales" is another's Uncle Tomfoolery.

See also and compare Opinion Override. The inverse trope is Offending the Creator's Own, where a work or character is condemned as offensive to a particular group despite the creator being a member of that group.