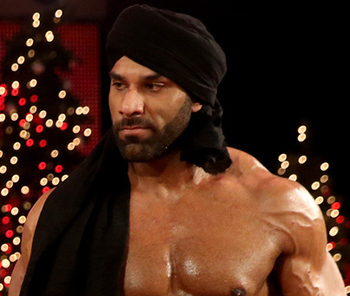 Yuvraj Singh Dhesi (born July 19, 1986) is an Indo-Canadian wrestler currently signed to WWE as Jinder Mahal. He debuted in 2002 in the Calgary wrestling scene. In 2010 he signed a developmental deal with WWE and was assigned to Florida Championship Wrestling, and in 2011 was introduced on the main roster scene as The Great Khali's abusive brother-in-law. When Khali eventually got fed up with Mahal's abuse, they feuded, with Khali emerging on top. After that, Mahal feuded with Ted DiBiase Jr., Sheamus and Ryback. He also made history as the runner-up in the tournament to crown the inaugural NXT champion, losing to Seth Rollins. He became a member of 3MB alongside Heath Slater and Drew McIntyre until both Mahal and McIntyre were released from their contracts.

In the summer of 2016, Mahal was called to return to WWE. He began his return by defeating Slater in a match for a contract as a part of Slater's then-angle of "hottest free agent", and portrayed a new persona as "The Man Who Came In Peace", which did not catch on with fans, and becoming involved in Rusev's feud with Enzo and Cass, but eventually their alliance fell apart. Mahal was also the final runner-up in the André the Giant Memorial Battle Royal at WrestleMania 33, being eliminated by Mojo Rawley with help of Rawley's friend, New England Patriots tight end Rob Gronkowski.

During the post-WrestleMania 33 Superstar Shake-up, Mahal was sent to SmackDown Live, where he quickly formed an alliance with fellow Indian wrestlers the Singh Brothers, and defeated Randy Orton for the WWE Championship, which he would hold and feud over for much of the remainder of 2017, with stories centering on his foreignness. After losing the title to AJ Styles in November, he would insert himself into the WWE United States Championship picture, eventually winning the title at WrestleMania 34 only to drop it to a returning Jeff Hardy eight days later.