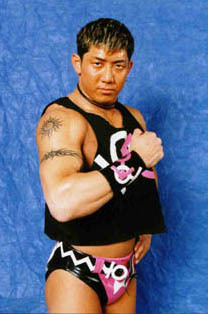 Katsumasa Kuroki (b. 1973) is a Japanese Professional Wrestler and martial arts trainer, best known for his ring name Magnum TOKYO. A regular sportsman, he fell in love with professional wrestling upon seeing Último Dragón wrestle in Genichiro Tenryu’s company WAR. He managed to convince Dragón to train him to be a wrestler and became the first graduate of the Toryumon dojo, training in the style of lucha libre in Mexico and having a short run as a jobber in World Championship Wrestling, adopting the name and gimmick of a erotic dancer called Magnum TOKYO. After his return to Japan along the rest of Dragón’s apprentices, Kuroki became the top face of their promotion, Toryumon Japan (later called Dragon Gate), and was famous for his feud with the evil Crazy MAX stable. He garnered fame and was considered one of the great three Toryumon aces along with CIMA and Masaaki Mochizuki. However, when his own spot was threatened by Milano Collection A.T. after a period of injury, TOKYO turned heel and founded the stable Do FIXER, thus turning out the Big Bad of the promotion for a time, until more injuries kept him away from the stardom. He would then indulge in a strange WAR renaissance project and became a cultist of Genichiro Tenryu, but this new direction was stopped by a grave eye injury, and TOKYO had to retire from pro wrestling. Years later, he would surface away from his own field, working for Fighting Opera HUSTLE as Alan Kuroki, a wrestling detective who came from fighting The Triads and the Tongs in Hong-Kong.note and who was Magnum TOKYO all the time After HUSTLE’s folding, he became a martial arts instructor for the Daido-juku school until 2015, year in which his sucursal was closed and he moved to the Kizunakai martial artis association.