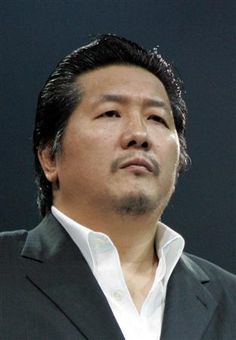 "At the peak of his popularity in 1989, Maeda was considered more like a major rock star rather than a wrestler, but was also respected like one of the country's major athletic heroes. The books written about him weren't in the section with books on wrestlers like Antonio Inoki and Riki Choshu, but in the section with people like Madonna and Bruce Springsteen."
—Dave Meltzer, The Wrestling Observer Newsletter, June 10, 1991
Advertisement:

Akira Maeda (born Go Il-myeong, January 24, 1959note He is of Korean descent, but he kept it secret for a time, until he got naturalized Japanese in 1984) is a Japanese Professional Wrestler and Mixed Martial Arts promoter, best known for his role in the Japanese shoot-style wrestling chronicle and posterior MMA boom. Formerly a Kyokushin Karate competitor, he debuted in 1978 for New Japan Pro-Wrestling and revealed as a promising rookie, traveling to England to wrestle there under the name of "Kwik-Kick-Lee", in storyline Bruce Lee's cousin. Eventually he left with Satoru Sayama, Nobuhiko Takada and other wrestlers to form Universal Wrestling Federation, pioneering the realistic shoot movement. However, he caused the fall of the promotion when shot on Sayama during a match due to an early disagreement. Upon their return to New Japan, he and Takada became the young leaders of a shoot invasion, gaining the IWGP Tag Team Championship with him and fellow shooter Osamu Kido. Maeda gained insane amounts of popularity and was even considered to replace main star Antonio Inoki, but Inoki vetoed the idea and Maeda left again, not without shooting on another enemy, Riki Choshu. After another failed incarnation of UWF, Maeda contacted Russian sambists and Dutch kickboxers and created Fighting Network RINGS, a shoot-style company who derived into full MMA over time. Maeda is currently retired from competition and figures as the head of the resurrected RINGS and an amateur MMA company called The Outsider.

From 2009 to 2010, following the tradition of Japanese pro wrestlers dipping in politics, he was also a candidate to the House of Councillors for the Democratic Party of Japan.