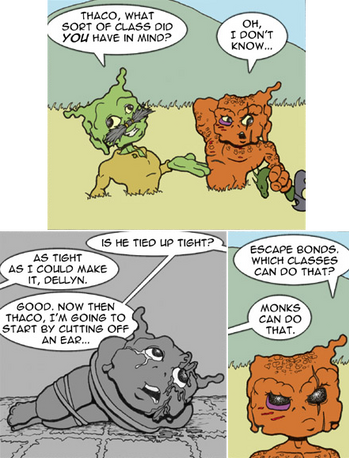 "That was only the first time I ever put myself out there, and then you didn't even bother to show up! And then you left town without saying goodbye, even though we were supposed to be friends. I was humiliated! I felt like I wasn't important! I never wanted to let myself be hurt like that again!"
— Moondancer, My Little Pony: Friendship Is Magic, "Amending Fences"
Advertisement:

Throughout time, there have been many things to which "never again" would be applicable. For this fairly common stock motivation, characters who have been abused, betrayed, mistreated, or otherwise persecuted in the past are acting to make sure that this sort of thing never happens to them again. This can encompass anything from taking a few levels in badass to ensure they'll be able to defend themselves against future threats, to attempting to Take Over the World and overthrowing the oppressive institutions that made them miserable, to refusing to care enough about anyone or anything to be hurt. The characters may also wish to spare others from suffering like they did, but there needs to be at least some element of preemptive self-protection involved to fit the trope.

It's a common motivation for the behavior of the Broken Bird. May lead to Had to Be Sharp. See also Safety in Indifference, Freudian Excuse, and My Greatest Failure. If the hurt is romantic in nature and new relationships are avoided for this reason, it's The First Cut Is the Deepest and Commitment Issues. See also Hope Is Scary, where recovering from despair is feared because it doesn't allow this, and We Are Not Going Through That Again for a (usually) more comedic take on the same sentiment.

Thank You For Freeing Me...

After having the possibility of reviving Sachi taken away from him, Kirito returns to BallsDeep69 to thank him for his help in killing all of his emotions.

Thank You For Freeing Me...

After having the possibility of reviving Sachi taken away from him, Kirito returns to BallsDeep69 to thank him for his help in killing all of his emotions.