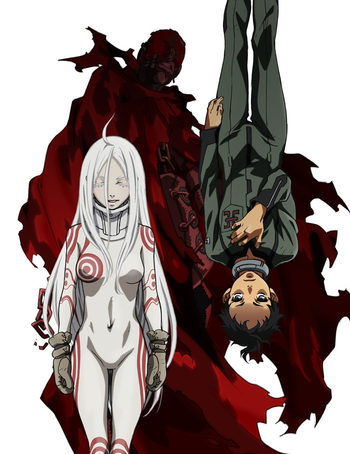 "Ever get blamed for your classmates getting murdered? Now you know how Ganta feels."
— TOM 3.5
Advertisement:

A survivor of the devastating magnitude 11.4 earthquake that sunk 75% of Tokyo (which he has no memories of), middle school student Ganta Igarashi lives an ordinary and peaceful life — until the day a mysterious man in blood-soaked crimson armor comes into Ganta's school, slaughters his entire class, and implants a strange red crystal on his chest. Ganta becomes the only suspect in the slayings; even though he proclaims his innocence, the court convicts Ganta and sentences him to life imprisonment at Deadman Wonderland, a privately-owned penal facility (the only one in Japan) disguised as a theme park to attract tourists.

While serving his sentence, Ganta befriends Shiro, a strange albino girl who knew Ganta as a child, and discovers the truth about Deadman Wonderland: the facility houses "Deadmen" — people endowed with an ability to turn their own blood into a weapon (the "Branches of Sin") — and the sadistic proprietors of the prison force the Deadmen to fight each other to keep them occupied…and to entertain the tourists willing to pay large sums of money to watch them fight.

As the days drag on, Ganta — the Only Sane Man in the facility — finds himself forced to make a choice: he can either lose whatever remains of his sanity or learn to stand up for himself.

Thus goes the tale of Deadman Wonderland, a monthly Shōnen manga written by Jinsei Kataoka and illustrated by Kazuma Kondou (who both worked on the Eureka Seven manga) that ran from May 2007 to August 2013. Tokyopop had the rights to the manga and published the English translation of the first five volumes before going under in 2011. However, Viz Media later picked up the manga, republishing the previous volumes starting February 2014 before going on to release the remainder of the series by February 2016.

An anime adaptation from Manglobe aired during the Spring 2011 season, with Crunchyroll simulcasting it. FUNimation licensed the anime in the US and Canada, and its dubbed version premiered on Toonami as part of the programming block's revival in May 2012. Due to airing years before the manga's end, the anime ends its story around Chapter 21. Meanwhile, the OVA deals with Senji (aka Crow) and is set two years after the Red Hole event (8 years before the main story).

Not to be confused with DC Comics' soul-possessing, former-circus-performer superhero whom bears a similar name.

"So make me your deadman".