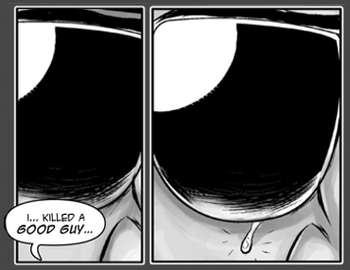 Perhaps you have had a Heel Realization. Perhaps you are Dying as Yourself and have just learned the enormity of your deeds. Perhaps you have learned too late that the act you sought Revenge for was fully justified. Perhaps you have failed in your one and only chance. Perhaps you were responsible for another's death; perhaps you know in your heart that you can never be forgiven for what you have just done. Now you can do nothing but cry. Maybe you are sobbing uncontrollably; maybe it's just a Single Tear — at this point you don't know or care. All you know is that the tears are going to fall and you cannot hold them back.

These are universally the sign that some spark of goodness resides in the one who sheds them. No matter how far gone s/he seems to be, a character who weeps for an evil act is not yet a completely evil person. This does not always mean that reform is possible (tears may be the last gasp of the conscience before plunging completely over the Moral Event Horizon, for example). But they can be the start of redemption, especially if the hero can apply The Power of Trust; or better, The Power of Love.

A Sub-Trope of My God, What Have I Done?. Common in a Villainous BSoD — though Ignored Epiphany can still ensue. A good character Fighting from the Inside may shed these, even if s/he has shown no previous ability to resist the control.

May be a form of Manly Tears. Tender Tears combine when they are grief-stricken by minor injuries to others.