Manga / Your Lie in April 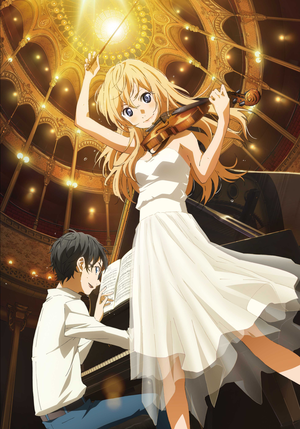 "I met the girl under full-bloomed cherry blossoms,
and my fate has begun to change."
"We're all afraid, you know...to get up on stage. Maybe you'll mess up. Maybe they'll totally reject you. Even so, you grit your teeth and get up on stage anyway. Something compels us...moves us to play music."
— Kaori Miyazono
Advertisement:

Kousei Arima used to be a Child Prodigy at piano. Winning many competitions and earning himself a name in the classical music world, he seemed to have a future that was bright, colorful and full of possibilities. However, after his mother Saki's death, his breakdown at a concert made him stop playing.

Kousei, now in middle school, spends his days living in a monochrome world, having spent two years without playing piano but managing to live every day thanks to his friends, his cheerful neighbor Tsubaki and his best friend Watari.

That is, until Tsubaki introduces him to Kaori Miyazono, a mysterious and beautiful classmate who plays the violin in a way he's never heard before, and that introduces colors into his world again.

Your Lie in April (known in Japanese as Shigatsu wa Kimi no Uso note Due to the use of "wa" as a topic particle, it could also be loosely translated as "April is when you lied to me". or just simply Kimi Uso note Your Lie for short), is a shounen manga written and illustrated by Naoshi Arakawa and serialized monthly in Shounen Magazine. An anime adaptation started airing in the Fall 2014 Anime season produced by A-1 Pictures. It can be watched legally on Crunchyroll.

A prequel manga telling the story from Kousei, Tsubaki, and Kaori's childhood, Your Lie in April: Coda is bundled with the DVD releases of the anime. Similarly, an OVA episode telling the beginning of the childhood rivalry between Kousei, Emi, and Takeshi was released with the last collected volume of the manga on May 17th, 2015.

Aniplex USA confirmed that there would be an English dub for Your Lie in April from Bang Zoom! Entertainment with Patrick Seitz as the ADR Director. It is noted to be the first non-action anime title from Aniplex USA's catalog to get an English dub (as Aniplex USA has historically dubbed only action shows or titles with Urobuchi's name on them).

A live action film was announced

and released in 2016, starring Kento Yamazaki (L from the Death Note 2015 drama series) as Kousei and Suzu Hirose (Chihaya from the Chihayafuru 2015 live action film) as Kaori.

ran in Tokyo and Osaka through Summer 2017.

A stage musical is planned for July 2020 in Tokyo.

"Soon it will be the time of year it was when I met you. Soon, it will be a spring without you."