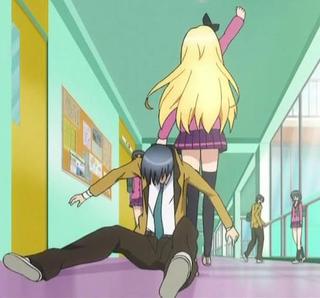 She's LITERALLY dragging him along!
Mac: Goo, I'm really sorry for what I said about you. You're not weird. You're really creative and funny and nice, and if you're not too mad at me, I really wanna be your friend too.
Goo: [excited] Okay! [hugs and squeezes Mac]
Mac: Okay... that's great... you're... crushing me.
— Foster's Home for Imaginary Friends, "Go Goo Go"
Advertisement:

This is a potential pairing (platonic or otherwise) between a pragmatic guy and a girl who is very full of energy.

The usual gender stereotype is that guys are stronger and may only care about sex, while girls are soft but nicer/smarter. This averts that stereotype (for the most part at least): the guy is the smart but physically inept one and it seems he got himself the company of a girl who most would have trouble keeping up with in the first place.

In some cases, the girl can be smarter than the guy, but because she's too busy trying to have fun, this is occasional at most. Perhaps this is why she acts as a Morality Pet sometimes. Compare Good Is Dumb, although she's more likely to merely be calling out the savvy guy than be evil in her smart moments, so it is closer to Good Is Not Dumb.

If the guy and the girl are in a romantic relationship, the girl may also be a Manic Pixie Dream Girl. If this girl is living with several savvy guys, she's likely a Nerd Nanny.

Unlike the Savvy Girl, the Savvy Guy is usually wittier and more prone to wisecracks and doesn't give in to his emotions quite as much.

There is a specific subset of this trope in a slice of fiction. Many works featuring male x male or female x female romantic relationships will also follow the trope, except for the gender requirement. One partner in the pair will be being and optimistic while the other is savvy and more sloughful, quiet, or otherwise less expressive.

While Dory is energetic and sings on a whim, Marlin is cynical and serious.

While Dory is energetic and sings on a whim, Marlin is cynical and serious.