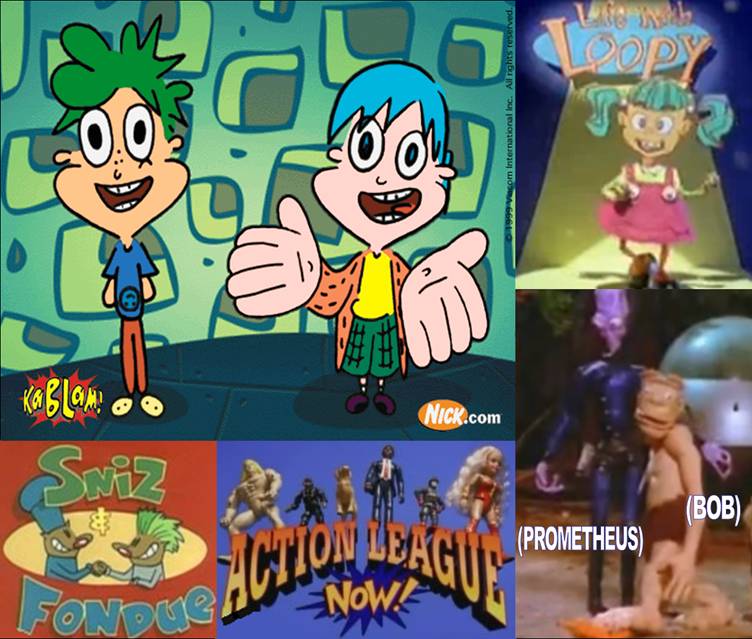 Chris: We crammed more cartoons into a half hour than anyone else.
Will: That was our promise, right?
— Chris Viscardi and Will McRobb, show co-creators, on KaBlam, from Not Just Cartoons: Nicktoons

KaBlam! is an animated anthology show designed to show off more animated shows (mostly failed pilots and experimental pieces), and the first spin-off of All That.

Running only a half-hour, it crammed in four two-to-five minute programs per episode as well as various miscellaneous animated short series that would come and go. It spawned two spinoffs, Action League Now (which was the centerpiece of KaBlam! throughout its run) and Angela Anaconda. It was masterminded by Will McRobb and Chris Viscardi, the creators of The Adventures of Pete & Pete (McRobb also wrote for Nick's original Doug and The Ren & Stimpy Show), as well as Robert Mittenthal, who co-created Nickelodeon's incarnation of Double Dare.

It aired on Nickelodeon from 1996-2000, with many episodes left unaired, even when the show reran on Nicktoons TV (a Nickelodeon spin-off that airs any old or failed Nicktoons series).

It was hosted by Henry and June, who resided inside a comic book (which was more notable earlier on; season four toned down most of the comic book references except for "turning the page") in which they frequently broke the fourth wall, mocked cartoon cliches, and got into their own adventures.

Common shorts on the show included:

These appeared in almost every episode, with the exception of Life with Loopy which suffered frequent Schedule Slippage in season one, and Sniz and Fondue when creator Mike Brandon left Nickelodeon in the middle of season three.

Other recurring shorts were:

The show has a strong cult following among fans of '90s Nickelodeon, and is currently being considered for TeenNick's The 90's Are All That block, although Nick would have to spend a ton of money for rights from the creators of the shorts in order for the show to air (The only parts of the show Nickelodeon flat out owns are the Henry & June and ALN material). On August 27th, 2016, Kablam! was revealed

to air on television for the first time in 10 years on Teen Nick's block, NickSplat celebrating 25 years of Nicktoons.

, and eight episodes can be streamed on VRV.

Note: Action League Now and Angela Anaconda have their own pages. Any related tropes should be listed there.