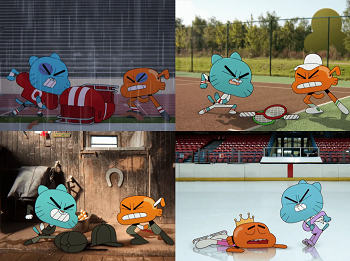 "Look, I'll tell you a story, all right? I once fell deeply, you know, profoundly in love with tropical fish. Had 60 goddamn fish tanks in my house. I skin dived to find just the right ones. Anisotremus virginicus, Holdacanthus ciliaris, Chaetodon capistratus. You name it. Then one day I say, 'fuck fish'. I renounce fish. I vow never to set foot in that ocean again. That's how much fuck fish."
— John LaRouche, Adaptation
Advertisement:

A character trait mostly in sitcoms, but occasionally played straight. A character gets passionately involved in hobbies for short amounts of time, before putting them aside and starting something else. May set up a series that is essentially Hobby of the Week or something similar.

Compare Compressed Vice when this is done with character flaws, and New Job as the Plot Demands when it's done with careers.

If the character supposedly always was an enthusiast in today's hobby rather than picking up something new, see Backstory of the Day. See Expert in Underwater Basket Weaving when the character is shown or described as being good at something with no practical application.