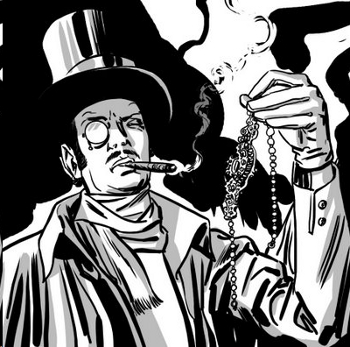 Hello, Monsieur. I'm just borrowing your jewels. Oh, and your wife. Don't mind if I don't shake hands before departure, I'd hate to take your watch... the last thing you have.
"You have nice manners, for a thief, and a liar."
—Smaug to Bilbo, The Hobbit
Advertisement:

The male version of the Classy Cat-Burglar may lack the cat jokes and themes, but he makes up for it with roguish good looks coupled with a breeding and style that manifests as a suave and debonair manner. He's usually a charmer, too—think James Bond without the government authorization.

He steals for the challenge/pleasure of the job and generally avoids violence while restricting his targets to those who can afford the loss. More importantly for plots, the character will often go out of their way to stop more serious crimes—especially with lives at stake—either on their own or with the help of the police. As such they often adhere to Thou Shalt Not Kill and/or are Technical Pacifists. Murdering your target or stealing from them at gunpoint is not very gentlemanly. It's not uncommon for the GT to give at least a part of the goods he steals to the poor, often while very cynically commenting on social injustice and how the rich surely got their wealth with dirty methods, so it's only fair to steal from them and then give to those who need it.

Like the Classy Cat-Burglar, the Gentleman Thief usually regards the police with a certain amount of disdain and condescension, and frequently leaves behind "calling cards" announcing who performed the crime; especially confident versions may announce their targets in advance to ensure a challenge. With a Worthy Opponent such as a Sympathetic Inspector Antagonist chasing him, they may have a less adversarial relationship, verging at times on friendship (and, sometimes, fraught with UST of the Dating Catwoman variety), where they do things such as leaving Big Bad crooks behind for their rival to take the credit for arresting. They're usually a Badass in a Nice Suit, occasionally doing the Tuxedo and Martini look. As he may not enjoy actual risks, the Gentleman Thief may decide that gambling is beneath him and cheat instead. Expect him to do so with sophistication. If he does gamble, expect him to be almost supernaturally lucky, or a tournament-grade player without peers. In many cases, they steal because they can and for the thrill, not out of an actual monetary need (since they are often rich)—though it may be a way to stave off Rich Boredom. This is also why they will never give up thievery for simple gambling.

They do exist in Real Life, yet their most usual technique is not stealing per se, but more like conning the victim.