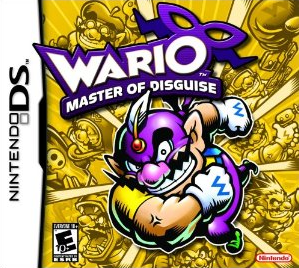 Wario: Master of Disguise is a Puzzle Platformer for the Nintendo DS.

One day, Wario was lounging on his sofa, watching TV, when a show called "The Silver Zephyr" came on. It was a show about a man named Count Cannoli who used his magic wand, Goodstyle, to transform into the eponymous master thief. After seeing him transform, Wario decided that he wanted in on the action, so he invented the Telmet, a device that allowed him to venture into the TV. Upon entering the TV, he landed right on Cannoli's head, causing him to drop Goodstyle. Wario, of course, being Wario, took Goodstyle for himself. Goodstyle proceeded to dub Wario his new master, and gave him his very own thief outfit.

Wario soon learns about the Wishstone, an artifact that, supposedly, can grant any wish. However, it was split into 5 pieces, which were then hidden in separate places. With this in mind, Wario makes it his goal to obtain the Wishstone pieces and recreate the Wishstone. However, this quest does not come without obstructions: Cannoli does not particularly enjoy having his wand stolen from him and will stop at nothing to get it back. If that wasn't enough, the Corrupt Corporate Executive Carpaccio also wants the Wishstone pieces, so needless to say, Wario has his work cut out for him.

The gameplay consists of traversing several different locations and using Wario's various disguises, each of which has its own special powers, to beat up enemies, solve puzzles, and search for treasure. The treasure chests require the player to win minigames to open, and consist of one of several different types of items, depending on the chest's color. Red chests contain treasures, which merely exist for the sake of 100% Completion. Purple chests contain area maps or important quest items. Green chests either contain Vita Mighties, which boost Wario's max health, or Guise Gems, which give him new disguises.