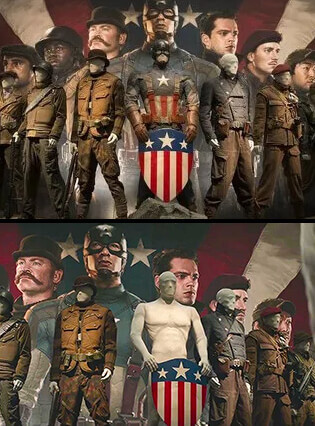 "If you want to fight a war, you gotta wear a uniform."
Lady Holiday: He’s not to be trusted. I wouldn’t put it past him to steal my most valuable and largest jewel, the fabulous Baseball Diamond […] on permanent display at the Mallory Gallery.
Miss Piggy: Why are telling me all this?
Lady Holiday: It’s plot exposition. It has to go somewhere.
— The Great Muppet Caper
Advertisement:

Some fancy object is sitting out in the open at a museum, carefully protected by velvet ropes and laser-security systems. Sometimes it's encased in a carefully monitored glass case. Fat chance it'll stay there for the entire movie.

In caper movies, objects like this are just asking to be stolen via a "Mission: Impossible" Cable Drop. Rest assured, if a tour group is looking at it in Act One, expect it to be stolen by Act Three. In horror movies, the object will be Sealed Evil in a Can. In action films, nearly anything is possible: the object might need stealing, or it might be a bomb... it all depends on the plot. Often overlaps with Break Out the Museum Piece, although that trope often is usually legally done as opposed to illegally.