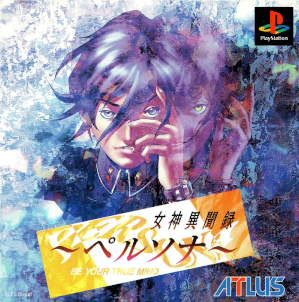 Persona is the first title in the Persona JRPG franchise, a spin-off of the Shin Megami Tensei video game series by Atlus. It's known as Megami Ibunroku: Persona: Be Your True MindTranslation "Tale of the Alternate Goddess: Persona: Be Your True Mind" in Japan, Revelations: Persona in its first North American release, and Shin Megami Tensei: Persona in its later North American PSP re-release. Why all the titles? Because the first release had... issues... with its localization.

You are an Ordinary High-School Student who takes up a dare to play a ritual-like playground game called "Persona" with your school friends. Suddenly, your party is struck by lightning and fall unconscious, where you experience a strange collective dream involving a golden butterfly.

Although you do not appear to have any serious injuries, you are sent to the hospital for a check-up. While there, you decide to visit Maki Sonomura, a bedridden classmate who has been in intensive care for a year. Yet your visit is cut short when Maki is suddenly rushed into the emergency room and the hospital undergoes a weird transformation into a demon-filled labyrinth. Fortunately, you and your friends have gained a supernatural power to help defend against the demonic hordes, rescue Maki and find a way out of this maze: the mysterious inner-power of "Persona".

At the time, the Shin Megami Tensei series was known for its incredibly deep, yet Nintendo Hard gameplay. Persona was an attempt by Atlus to create a Shin Megami Tensei game that would appeal to the masses: a character-driven RPG that turned down the difficulty a few notches in order to be more accessible. And by and large it worked, creating a very successful series which (starting with Persona 3) has eclipsed the main series in popularity. Many of the main characters from Persona would later go on to make cameo appearances in the Persona 2 duology (Three even being playable characters in Persona 2).

The battle system is grid-based, which means that a character's position on the battle grid determines what they can attack. This makes melee fighting far more difficult than it has any right to be, and you often lose turns because your character isn't in range to attack anyone. While wandering in dungeons, you'll have a first-person viewpoint (a MegaTen mainstay at the time), but in certain rooms it switches to a third-person isometric view that lets you talk to your fellow party members. The conversation system that would be used in Persona 2 (and dropped in Persona 3) was first used here, and the bad localization makes it even more bizarre than it would normally be: in what other game could you convince demons to help you by dancing the hula? Likewise, in what other game can you be killed by an evil, hula-dancing toilet?

The really awful localization tends to be the most well-remembered element of this game outside of Japan. One of the earliest titles released by Atlus USA, it has gone down in gaming history as a textbook case of how not to localize a title. You see, Atlus had got it into its head that they were going to localize the Megaten series as the "Revelations" series note although this actually makes some sense — every Megaten game features Revelations, but only the very first featured a true goddess reincarnating, and it didn't even have the word shin in the title, and turn all the spells and demons into generic RPG-sounding names and make the characters Americans. The problem was, most of the translation didn't make sense. Yet despite all of this, it still has a die-hard cult following to this day, and copies of the PS1 English version are still incredibly rare and sell for more than twice the original retail price.

The sudden popularity of the franchise after the successful revival with Persona 3 led to a PSP Updated Re-release with brand new cel-shaded cutscenes (replaced the now-dated 90s era CG), a new interface, and numerous improvements to the game's balance, including a better mini-map and many more save points. This release came to America with much fanfare, especially from Atlus themselves, who were quick to point out the newer, more faithful script, restoration of original character designs, and inclusion of all content left out of the PS1 release.