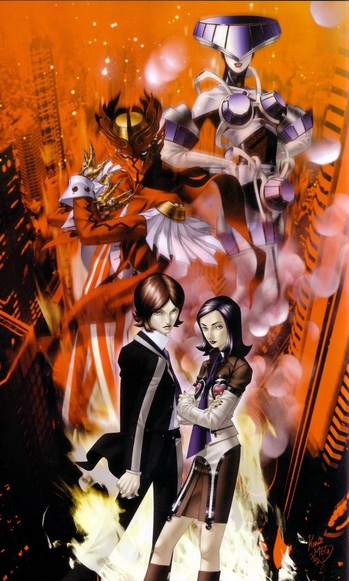 Let there be light in the dark night.note On the left: Apollo and Tatsuya Suou. On the right: Maya Amano and Artemis
"Once the star comes to a complete halt
The Maia Maiden's heart stops with it
What then remains is paradise on earth
Marking the end and a new beginning"
— "The Oracle of Maia" note (PSP translation), a brief description of the plot of Persona 2: Innocent Sin
Advertisement:

Persona 2 is a duology of games released in 1999-2000 as an Urban Fantasy spinoff of the popular JRPG franchise Shin Megami Tensei. It is the second title in the Persona spinoff series developed by Atlus, and takes place approximately three years after the first Persona.

Innocent Sin (Tsumi) stars loner tough-guy Tatsuya Suou, a Japanese high school student from Sumaru City. A popular rumor going around the city states that if you dial your own cellphone number, a mysterious man named "Joker" will appear before you and grant you whatever you wish. When Tatsuya and his friends investigate, Joker appears and marks them for death, accusing them of committing a crime against him which they can't remember. As the Joker Charm runs out of control and rumors start to become reality, Tatsuya and his friends must uncover the mystery of "The Masked Circle" and stop Joker before it's too late.

Eternal Punishment (Batsu) stars intrepid pollyanna Maya Amano, a Japanese journalist from Sumaru City. A popular rumor going around the city states that if you dial your own cellphone number, a mysterious man named "JOKER" will appear before you and murder whoever you wish. When Maya and her friends investigate, JOKER appears and marks her for death, accusing her of committing a crime against him which she can't remember. As the Joker Curse runs out of control and rumors start to become reality, Maya and her friends must uncover the mystery of "The Other Side" and stop JOKER before it's too — wait a second... Haven't we done this before?

Persona 2 straddles a fence between the previous title and sequels to follow. The grid-based battles are thrown out, along with the moon phase calendar (which made a comeback in Persona 3). The Contact system, however, has been greatly overhauled: In addition to negotiating with demons in their own quirky style, selecting two or more characters* even if they're KO'd (in Eternal Punishment), though they obviously can't initiate. Instead, a character may say their dues or some form of insult on said fallen character. will yield a new contact based on their relationship, which changes over time. Though mainly a source of comedy in 2, the concept of relationships affecting gameplay would take center stage with Persona 3's Social Links. Summoning works much the same way, with "Fusion Spells" enabling two or more Personas to unleash Combined Energy Attacks. Also new are "contracts": when you make an enemy happy, they make a guarantee that they won't hurt you, and may also fork over items to keep you alive.

Though the PlayStation version of Innocent Sin never left Japan, Eternal Punishment was localized and released in North America in 2000. While it isn't necessary to play the first to understand the second, much of the fun of the second comes in spotting the changes between the two continuities. Atlus initially announced no plans in localizing Innocent Sin into English and later elaborated they had planned to release it, but were prevented from doing so; depending on who you ask, the game was either Christmas Rushed or canceled outright due to content issues. A fan translation

of this version was released in 2008. Atlus later stated they were aware of the fan translation, but chose to not interfere with it.

Innocent Sin was remade for the PlayStation Portable with widescreen support, new art, enhanced demon negotiations, and the option to pick between the original soundtrack and a remastered version. It also slightly censored the more overt Nazi imagery at the end of the game. This version of the game was released in North America in September of 2011 and in Europe in November 2011, published by Ghostlight. It was confirmed that Eternal Punishment would also be remade and was released in May 2012 with an extra scenario

, but alas, it was not released outside of Japan. Thankfully, the original PlayStation version was re-released around the same time on PlayStation Network

, available in all regions.

There's a tie-in manga called Persona 2: Tsumi to Batsu, which was only released in Japan and in France/French-speaking countries and territories. An updated version has a gaiden story epilogue which ties the story in with the rest of the Persona verse.

Not to be confused with the game called Sin and Punishment.

I can't heal
if I keep on running away
from my own fate...

Photon Cannon is a powerful skill that deals Havoc damage to all enemies.

Photon Cannon is a powerful skill that deals Havoc damage to all enemies.