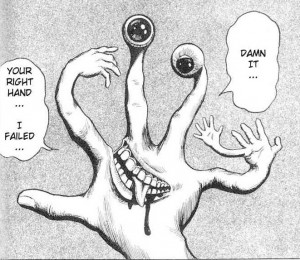 This hand talks back.
"Arthur, my mustache is touching my brain..."
— The Tick, That Mustache Feeling
Advertisement:

Welcome to the lovely land of Body Horror. Simply put, this is any form of Horror or Squickiness involving body parts, parasitism, disfigurement, mutation, or unsettling bodily configuration, not induced by immediate violence.

For example: Being shot in the chest and having your organs exposed is Bloody Horror, not body horror. Turning into a monster is a Baleful Polymorph, but still not a body horror. Having your chest tear open of its own free will, exposing your organs as your ribcage is repurposed as a gaping maw full of bony teeth? That is Body Horror.

This trope is difficult to pin down, as it has a wide range of potential applications and invocations, but what they all hinge upon is the Primal Fear of the Uncanny Valley, deformity, parasites, contamination, the ravages of disease, and the aftermath of bodily injury. The mind knows on a deep instinctive level that faces should have eyes and hands should not. Organs and bones belong on the inside, and parasites and circuit boards do not. Bodies should be roughly symmetrical and have logical proportions. And nothing should ever look like this page's example image.

Slowly mutating in a sickeningly twisted and deformed manner after contracting The Virus, a close encounter of the squick kind leaving someone the incubator for a Chest Burster, a rotting zombie, an Eldritch Abomination resembling a tangle of organs, and a shapeshifter abandoning any attempt at aesthetics or imitation to become a writhing mass of random but recognizable parts are all examples of Body Horror.

Obviously, as a trope based on Primal Fear, body horror is Older Than Dirt.

For a character or Mook who has this as their back story, see Was Once a Man and Tragic Monster, and/or The Grotesque. If Body Horror is played for sympathy, it can be used to explore the issue of What Measure Is a Non-Human?. It can result in And I Must Scream if the victim is aware of their condition but totally helpless. Using this trope can result in Our Monsters Are Weird of the most horrific kind.

Sub-supertrope of Evil Is Visceral.

Tropes that can involve, stem from, or result in Body Horror: