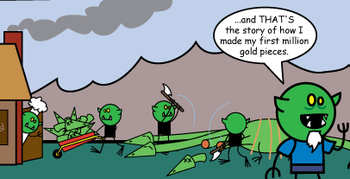 All you can eat hydra heads!
"Every part of the Kaiju sells. Cartilage, spleen, liver... Even the crap! One cubic meter of crap has enough phosphorus in it to fertilize a whole field!"
— Hannibal Chau, Pacific Rim
Advertisement:

Fictional, nonsapient creatures (aka the monsters) often produce all kinds of useful resources (aka the organs); points added if the transaction (aka the trafficking) turns out to be profitable. So, some unscrupulous people decide to forgo any pain or life-threatening injury they may cause the creature and go harvest said resources. Either by keeping the creature captive or raising it for this express purpose.

As a result, it's not rare for the exploiters to prove far more dangerous than the creature itself. They can be outright Villains, Opportunistic Bastards, or even Unscrupulous Heroes if the situation calls for it.

The people using the monster materials can either be as bad as the harvesters or oblivious to the process. In the second case, expect that, the longer the extraction goes on, the likelihood of someone bringing it to attention (and causing a public scandal) increases.

That's why this trope often comes in hand with a "What Measure Is a Non-Human?" debate. However, it's possible to make use of it without commenting on it — usually by not showing the most unsavory parts (such as killing, hunting, and painful extractions) of the process or just making it like shearing sheep: if done carefully, it doesn't harm the creature.

In any case, the key element of this trope is that the exploited creatures do not possess sapience. I.e., human-like cognition (see Analysis.Monster Organ Trafficking for an extended discussion on this and the previous topic).

Can overlap with Solid Gold Poop if the resource extracted is the creature's waste material, with Fantastic Medicinal Bodily Product if the product has healing properties, with Eye of Newt if the material is a magical reagent, and with Fantastic Drug if the substance is psychedelic. May overlap with Captured Super-Entity as long as said entity is not sapient.

Compare with Fantastic Livestock, when creatures are raised for food.

Contrast with Human Resources, for the catch-it-all trope about harvesting useful stuff from sapient beings, even if they look "monstrous".