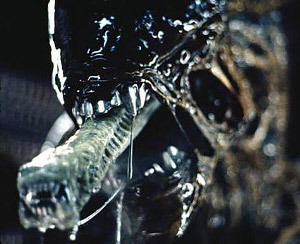 Disturbing Phallic imagery not required.
"These aliens have a lot of stuff in their mouths; not only the tongue and their famous teeth, but another little head on a stalk, with smaller teeth. Still to be determined is whether the littler head has a still tinier head inside of it, and so on."
— Roger Ebert on Alien
Advertisement:

Most often a form of Bizarre Alien Biology, and usually played for horror or at least a thrill: instead of a tongue, a creature has another mouth, a face, or even a whole tiny head inside its mouth. Expect it to be nestled snugly among More Teeth than the Osmond Family, and it may have a few choice fangs of its own.

The interior mouth may be a parasite, an offspring, or an actual part of the larger organism, such as a reproductive organ (the better to give you a Face Full of Alien Wing-Wong). Most of the time, it will just screech at the terrified protagonists and do nothing effective.

The Trope Codifier are the Xenomorphs from the Alien franchise. As such, expect a secondary mouth to be a common feature of the Xenomorph Xerox too.

Note that some fish actually have something like this, called a pharyngeal jaw.

While most of these are simply immobile bony blocks in their throats to "chew" food, in the case of the moray eel,

it has the unique ability to actually slide its forceps-like pharyngeal jaw up its throat and out of its mouth to grab food and pull it down its esophagus. (Amusingly, this ability was only discovered in 2007, three decades after Giger designed the xenomorph.)

This is one way of having Too Many Mouths. See also Multipurpose Tongue and Lamprey Mouth. Subtrope of Matryoshka Object.

Has a skull-like face and two long skeletal arms inside its mouth.

Has a skull-like face and two long skeletal arms inside its mouth.