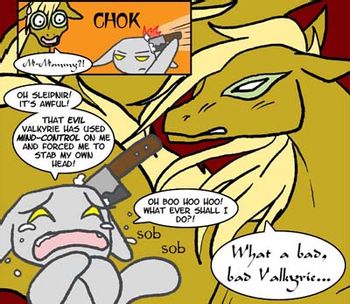 If you believe the little plush kitty, you must be new here. Welcome!
"The first girl to cry always wins."
— Sae, Peach Girl
Advertisement:

Using self-inflicted injuries, real or fake, to deceive others and manipulate them into doing what you want. Often used to frame a third party, this strategy is particularly effective for, and often used by, women, due to societal prohibitions against hurting women. Named for the trick sometimes used by a mother gazelle (as well as certain birds and deer) of pretending to be injured in order to lure a predator away from her young. Once a safe distance is reached, the pretense can be dropped, and the mother can bound away, leaving the hapless predator in the dust.

Pretending to be a victim can be a great way of disguising your own guilt, so this is a common trope on a mystery series. In Film Noir, this became a stock trick for the Femme Fatale or The Vamp. May involve Crocodile Tears. When the self-inflicted injury is terminal, it can become a case of Suicide, Not Murder.

This is by no means limited to personal injuries. The Evil Overlord can injure his own people and try to blame another country, providing a quick and easy justification for war. This is mentioned as #34 (not that kind) in The Thirty-Six Stratagems, making this one of The Oldest Tricks in the Book. Do note, however, that feigning injury so as to attack an enemy who comes to render you aid is a war crime under the Hague Conventions; on the other hand, making your own position look untenable to lure the enemy into attacking you, then flipping the tables on them, is fine.

Can cover anything from a lame excuse to Malicious Slander. For a slandered party, it often precludes I Can Explain, and can lead to Poor Communication Kills. Can overlap with I Surrender, Suckers. If you're a member of a minority, Everything Is Racist is a convenient way to invoke this trope. When done against police, it's often a Police Brutality Gambit. When done on a large scale, it's often a False Flag Operation. False Rape Accusation is a very specific subtrope of this. If done against a motorist for insurance money, see Staged Pedestrian Accident. If the target is actually guilty, see Framing the Guilty Party. The Bully Hunter and Wife-Basher Basher easily fall for this trick. The Hero with Bad Publicity also tend to get their reputation from these.

Compare Decoy Damsel, Arrested for Heroism, Why Did You Make Me Hit You?, Playing the Victim Card, Defensive Feint Trap, and Insidious Rumor Mill. Often related to Guilt by Association Gag and Et Tu, Brute?. Contrast Wounded Gazelle Warcry where it's not a trick. Not to be mistaken with Deliberate Injury Gambit as well; that one is about someone getting themself hurt for real to achieve a goal. Compare Sick Captive Scam for instances where a prisoner pretends to be sick or injured to get the drop on his captor. Feigning Healthiness is an inverted variant.

Scene from the 1966 film, Dracula Prince of Darkness. After Charles and Diana narrowly escape Dracula's castle, they're found by the local monks and taken in. But Dracula, along with a newly vampirized Helen, follow after them. When night falls, Helen locals where Diana is sleeping and pleas for help to get away from Dracula's control.

Rose is an idiot.

Scene from the 1966 film, Dracula Prince of Darkness. After Charles and Diana narrowly escape Dracula's castle, they're found by the local monks and taken in. But Dracula, along with a newly vampirized Helen, follow after them. When night falls, Helen locals where Diana is sleeping and pleas for help to get away from Dracula's control.

Rose is an idiot.