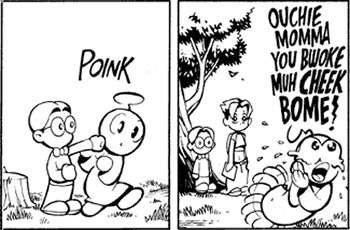 "You made me swallow my gum. It's going to be in my digestive tract for SEVEN YEARS!"
— Gideon Graves, Scott Pilgrim vs. The World
Advertisement:

In dramatic settings, no matter how much punishment a villain takes, all that seems to really rile them up is deliberate, albeit minor, injury. Especially across their face. Extremely potent with egotists. This tends to send The Fighting Narcissist into a foaming rage. Sometimes occurs with characters who are Nigh-Invulnerable, where the overreaction is because even inflicting a minor injury on them is supposed to be impossible; it might even be the first time that character has ever been injured. Or it could be a matter of humungous ego: 'How DARE this Puny Earthling even think of striking ME!'

Can (un)intentionally coincide with the Rant-Inducing Slight or Afraid of Needles.

Contrast with Major Injury Underreaction, and with After-Action Patch-Up where the reaction tends to be humanizing.

After Mad Pierrot's bloodthirsty rampage is finally stopped by Spike stabbing him in the leg, his reaction is one that leaves Spike speechless.

Example of:
I Want My Mommy!

After Mad Pierrot's bloodthirsty rampage is finally stopped by Spike stabbing him in the leg, his reaction is one that leaves Spike speechless.