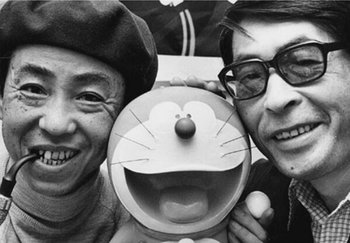 Left: Hiroshi Fujimoto; Right: Motoo Abikonote Middle: Doraemon
Fujiko Fujio (藤子不二雄) was a nom de plume of a manga writing duo formed by two Japanese manga artists. Their real names are Hiroshi Fujimoto (藤本 弘 1933–1996) and Motoo Abiko (安孫子 素雄 1934–2022). They formed their partnership in 1951, and used the Fujiko Fujio name from 1954 until dissolution of the partnership in 1987. From the outset they adopted a collaborative style where both worked simultaneously on the story and artwork, but as they diverged creatively they started releasing individual works under different names, Abiko as Fujiko Fujio (A) (藤子不二雄Ⓐ), and Fujimoto as Fujiko F. Fujio (藤子・F・不二雄). The company Fujiko-Pro continued their legacy.
Advertisement:

Their most internationally well-known work (and probably most successful) would most likely be Doraemon, though Little Ghost Q-Taro was the first to come out in America. Other than that, the rest of their works aren't quite that prolific in the Anglosphere and are mostly reserved for Japanese audiences. Though they've had followings in other non-English speaking countries.

But should one take the time to read and observe their works, one could find the visible use of Strictly Formula. Also, most if not all, their works are all for children. Well, at least when it concerns Fujiko F. Fujio while Fujiko Fujio (A) concentrated on work incorporating more Black Humor.

Works with their own page(s):

The following tropes exemplified in their works include: