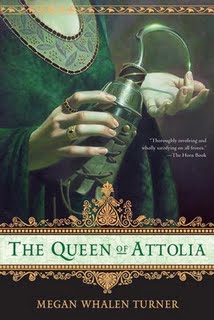 The books of the series are, in order:

There are also several short stories in the same universe:

Due to the sheer number of spoilers present in this series, spoilers are unmarked except for those from the latest book, Return of the Thief. If you haven't read the full series, we strongly suggest that you do so before proceeding. You will be spoiled. You've been warned.