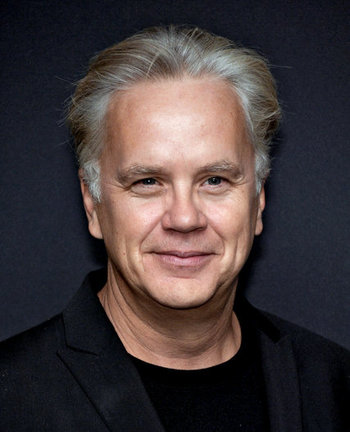 Timothy Francis Robbins (born October 16, 1958) is an American actor, screenwriter, director, producer, and musician. He was born in West Covina, California, and raised in New York City. He moved to Greenwich Village at a young age, began performing in theater at age 12, and joined the drama clubs at Stuyvesant High School. He studied at SUNY Plattsburgh for two years, and finished his college education at the UCLA Film School.

His acting career began during his teenage years at Theater for the New City, where he performed in their Annual Summer Street Theater and starred in a musical adaptation of The Little Prince. His first television role was as Andrew Reinhardt, a domestic terrorist who appeared in three episodes of St. Elsewhere in 1982, followed by a guest appearance in Moonlighting in 1985. He mainly took small parts in films and other television series until his breakout role as pitcher Ebby Calvin "Nuke" LaLoosh in the 1988 film Bull Durham.

Since then, he has written, produced, directed, and starred in a wide spectrum of films, from inspiring dramas like The Shawshank Redemption to thrillers like Arlington Road to comedies like The Hudsucker Proxy. He typically plays relatable everymen who find themselves thrown into unusual circumstances, and his awards run the spectrum from Academy Awards of the highest caliber to Razzie nominations of the lowest—more of the former than the latter, though. To date, he is the tallest actor to win an Academy Award, standing at 6'5. His size doesn't come up often in his movies, but he did poke fun of it in his appearance on Sesame Street, where he had difficulty finding a bed that fit him.