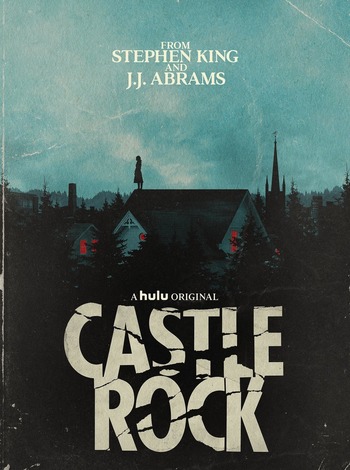 "Has it begun?"
"Everyone's got a theory how it started. About Castle Rock's original sin… Whenever it began, whoever's sin we're paying for; we're trapped in a cycle that's been going back centuries. There's blood in every backyard. Inside every house. People say it wasn't them, it was this place. And the thing is... They're right."
Advertisement:

A Hulu original Anthology series produced in collaboration between J. J. Abrams and Stephen King and taking place in the eponymous Maine town, Castle Rock is the culmination of King's 40-plus years as one of the most popular authors ever read. Not a direct adaptation of any particular King novel or story, Castle Rock instead features characters, locations, and themes from his numerous works. It all takes place within the small Maine town as the show mines original stories from the raw King material.

In Season 1, we meet Henry Deaver (Andre Holland) a death row attorney who returns to his home town after receiving a mysterious phone call. After the warden of Shawshank State Penitentiary commits suicide, a mysterious young man called only "The Kid" (Bill Skarsgård) is discovered locked away in an abandoned wing of the prison. As Henry investigates, he meets old acquaintances such as former-Sherieff Alan Pangborn, his dementia-riddled mother Ruth, and his childhood neighbor Molly Strand. But the more Henry looks, the more he learns about Castle Rock's dark and bloody history, and how it relates to his own disappearance as a child.

Season 2 sees the arrival of a woman by the name of Annie Wilkes (Lizzy Caplan) and her daughter Joy, who are detoured following a car accident. But a violent chance encounter threatens to unravel the secrets and lies Annie has kept from her daughter all her life. Meanwhile, as the head of the town's notorious Merrill family (Tim Robbins) lays dying, and his nephew "Ace" Merrill stands to take his place, their feud with the Somali immigrant community intensifies, threatening to engulf the nearby town of Jerusalem's Lot.

Look here for the Season 1 teaser

, and here for Season

. Two weeks before the Season 2 premiere a 14-minute video titled Now Leaving Castle Rock was released as a promotion which can be found here

Cancelled in 2020 after its second season.